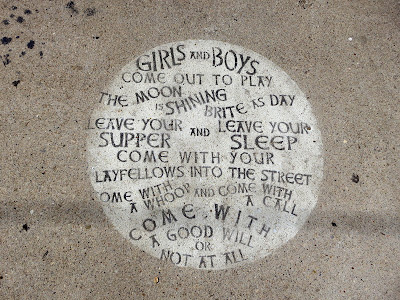 In the past couple of weeks we have travelled to Toronto Ontario a few times.  On two occasions my wife wanted to visit an old friend.  When she did I was left to wander the streets of Toronto.

Toronto is the capitol of Ontario, and the largest  city in Canada.  It is also one of the oldest cities in the northland.  It has an incredible amount of character, something I didn't really realize until I wandered its streets for an afternoon.

These are some pictures from my first wander through the mad streets of Toronto.

A sculpture of the poet Al Purdy, found in Queens Park, 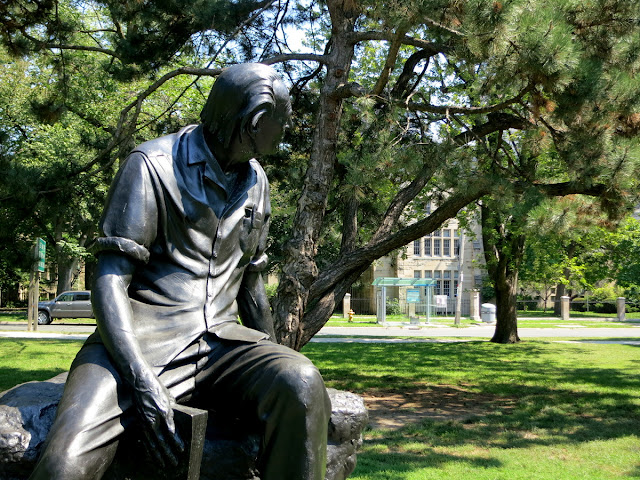 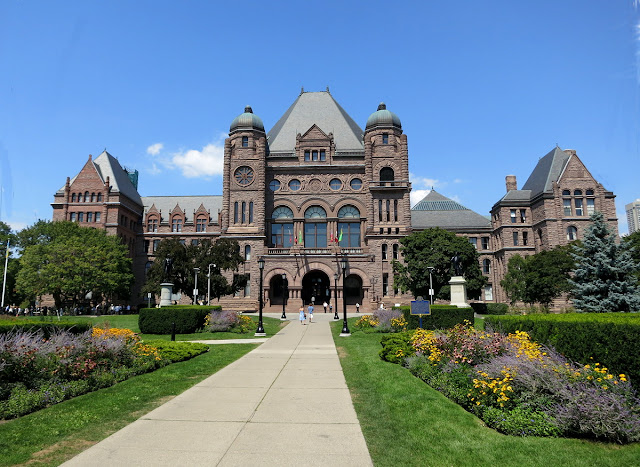 Tim Hortons is Canada's most popular coffee and donut shop.  They also offer free wifi, which is a bonus when one doesn't have a cell phone that roams outside of the US. 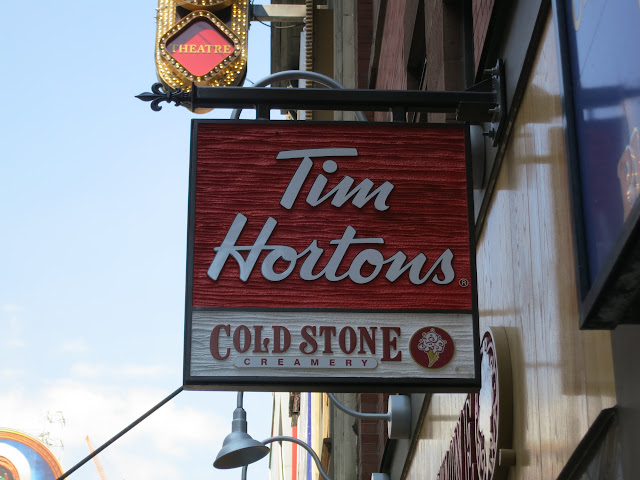 Old Toronto City Hall: This is now a courthouse, but was once the center of Toronto politics.  Also it is the site where the first Santa Claus Parade (ever!) occurred.  The parade still happens annually. 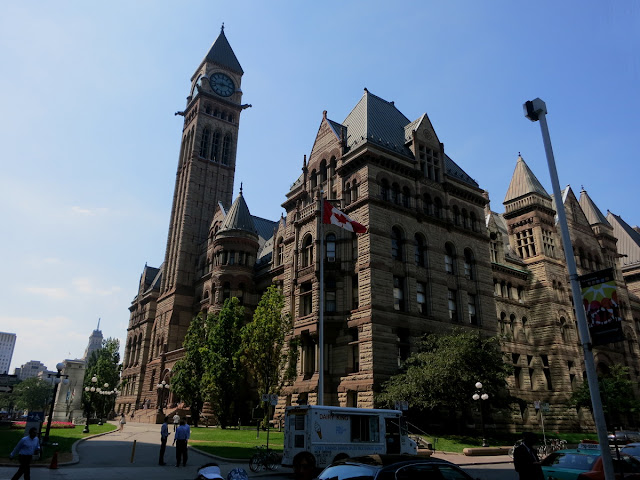 Interesting fact learned while geocaching:  The architect of the Old City Hall was not allowed to put his name on the building.  He got around this by hiding his name in the decorative bits that run around the top of the building.  You have to walk completely around the building, always looking up, to read the entire message.  One of the letters is shown here. 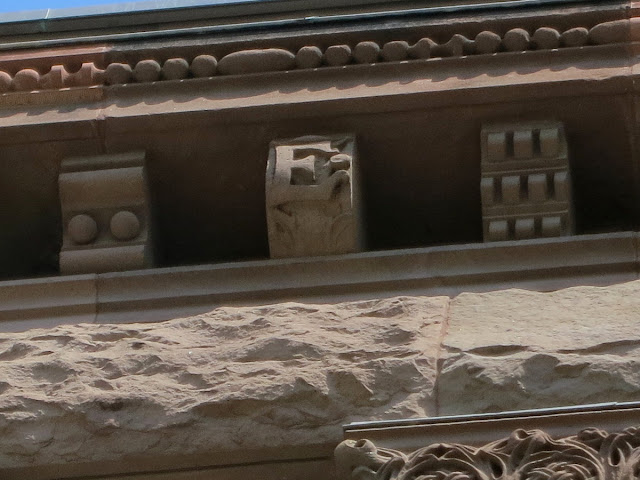 Jack Layton was a member of parliament for Toronto, and the leader of the New Democratic Party.  Much loved by the youth.  He died about a year ago of cancer.  The day before I did my wander was the one year anniversary of his death, and the area youth held a memorial vigil, and wrote messages to Jack on the walls of the walkways surrounding Nathan Phillips Square. 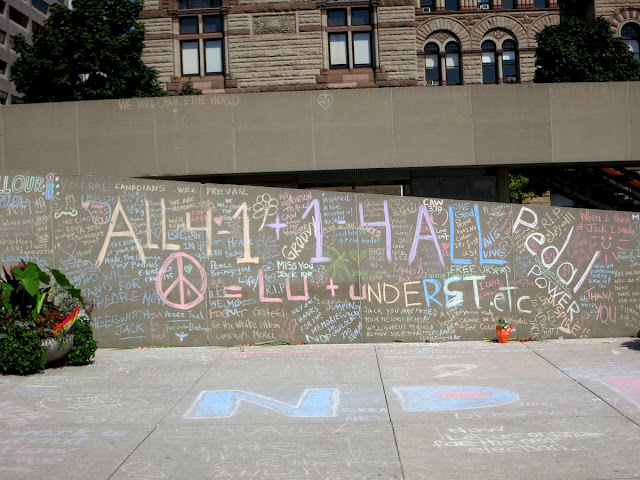 The round buildings are the current location of Toronto City Hall, located at Nathan Phillips Square.

Note that you can see these buildings in two Star Trek Episodes:  The Original Series's All Our Yesterdays, and Next Generation's Contagion. 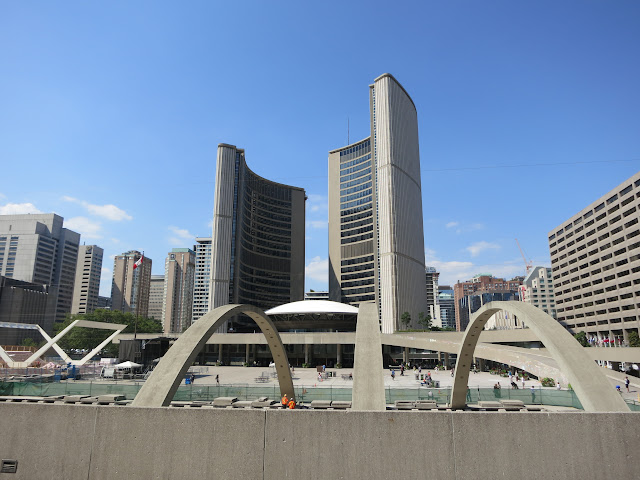 The Hudsons Bay Company is the oldest corporation in North American (and one of the oldest in the world).  It started out as a fur trading company way back in the 1500s, and is now one of Canada's premiere department stores. 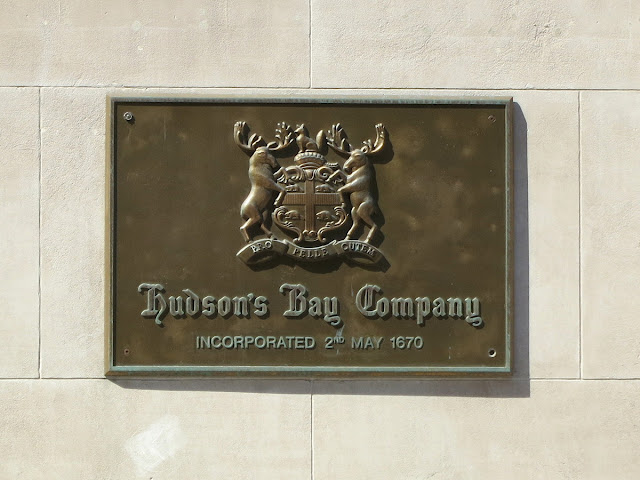 The CN tower is the second tallest free standing tower in the world. It is used as a communications tower, tho it also has two restaurants, and a couple observation decks.  It defines the Toronto sky line and no tour of Toronto would be complete without including it. 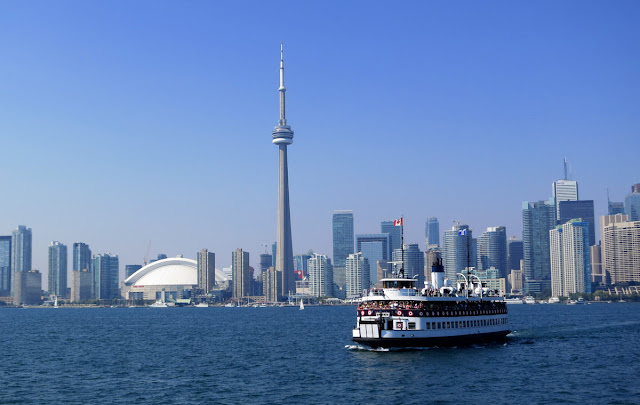 Posted by Dave DeBaeremaeker at 9:52 PM