Caught In The Act: The 360 Degree Panoramic Muggle Story

Recently I went out for a simple park'n'grab cache, and ended up with a great muggle story.

The cache was hidden in some shrubs, so I spent a few minutes poking through foliage. When I finally spotted the container, I retrieved it and then moved a few feet away to a post so I could open it and sign the log in relative comfort. 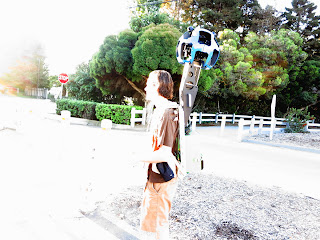 Before I could open the container, I noticed that a small group of people had just came into view in the distance.  This park is very busy so that in itself was not unusual.  What was unusual was that they seemed to have two large orbs hanging over their heads.  As I watched them, trying to figure out what those orbs were, another pair came into view.  Curiously one of them also had an orb over his head.

So as they walked towards me, I held the cache (a small tupperware container), in my hand, trying to not draw attention to it.  As they passed me on the trail I realized the orbs had cameras in them.

It was then that I realized that what I was seeing was a group of Googlers taking out a wearable version of the Street View cameras out for a test run. 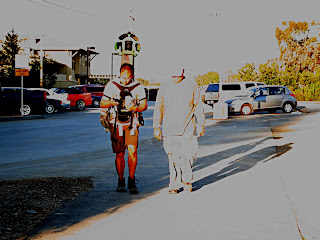 It is one thing to be caught geocaching by muggles.  It is another to be caught on camera.  It is another level entirely to be captured by 3 high definition 360 degree panoramic cameras collecting data for the most popular map service known to man. That, my friends, is the ultimate "getting caught in the act."

I asked them what was up and they confirmed that they were exactly who I suspected them to be.  They were on a test run, so I seriously doubt my image will be published, but you better believe I'll be watching out in case it does.

Once they passed I signed the log and put the cache back in its hiding place (it was in a rosemary bush, so afterwards I smelled *amazing*, making this cache the best smelling cache I have ever found).

That is my crazy muggle story.  What muggle stories do you have?  Let me know in the comments section below.


(Note: Please forgive the quality of the images on this post. My camera got knocked into a weird mode in my pocket, and I didn't notice until after the encounter in question. If it helps you can pretend that I was being 'artistic'. Also this had nothing to do with yesterdays post.  It is just a coincidence that the posts are back to back.)


Posted by Dave DeBaeremaeker at 7:03 PM

HAHA! that is brilliant, however, however relatively small or large the container is, luckily you were standing away from gz, and google dont put faces to people, but that is so the best muggle story ive ready so far, thanks :)

Nice. I hear they are mapping the oceans as well. Incredible.

Heard about your experience on Podcacher.com. Decided to tweet the link to this post. Hope you don't mind! Great story... a once in a lifetime experience for sure! -- authorized users (Batavia, NY)