Scenes From The Googleplex 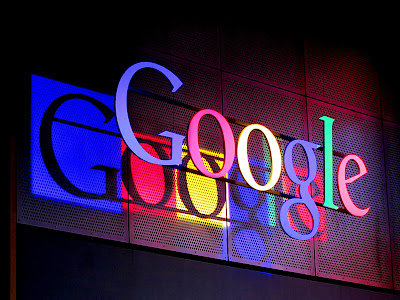 I am writing this blog post from 33,000ft over Kansas, heading east.

I have been out in Mountain View California visiting Google HQ for the past week.  I have been there several times, but I figure the vast majority of my readers haven't, and may be interested to see some of the sights that is the Googleplex, so I decided to whip up a quick photographic tour.

The 'plex is a large area, taking up many city blocks.  All of the spaces between the buildings are public areas, so anyone can go visit - at least if they stay outside :)

This first shot is the courtyard for Building 44, where a large chunk of the Android team works.  They have statues outside for each release of Android, which if you are not aware are named after desserts. Pictured here are statues for Gingerbred, Eclair, Ice Cream Sandwich, Honeycomb and Jelly Bean. On the other side of the sidewalk is the Android mascot. 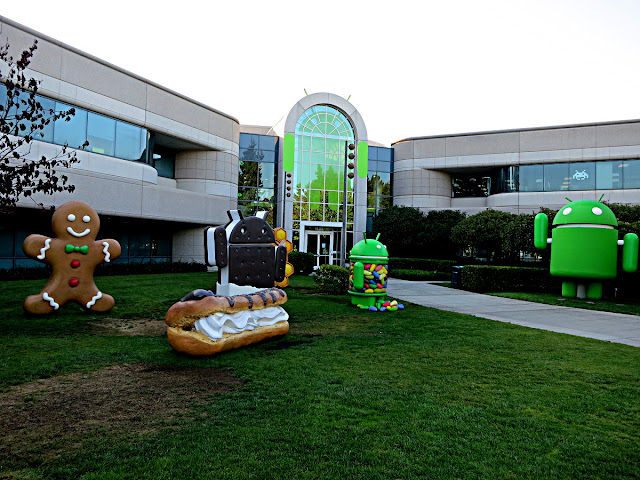 A shot of one of the many shuttle buses that transport Googlers to and from various places in the bay area. Each shuttle has wifi, so Googlers can work while commuting. 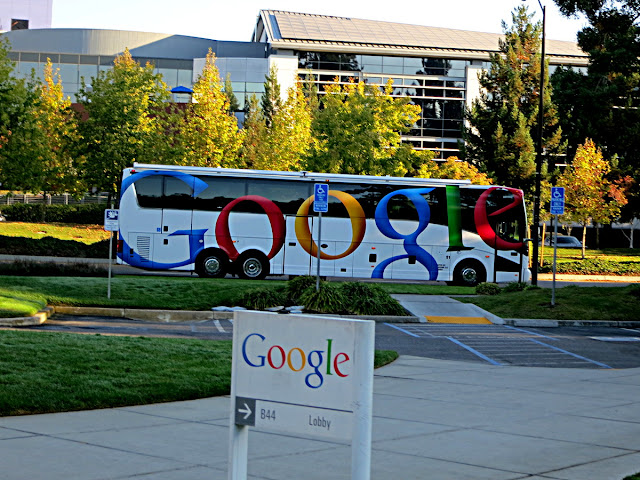 A statue of the Android droid wearing the Noogler beanie outside B46. New Google employees, or Nooglers, are given multi-coloured beanies with propellers during their first week to identify them. 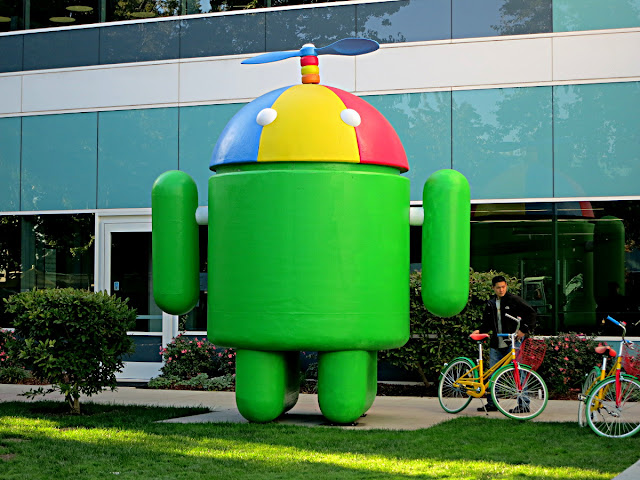 A large statue outside B46. His head is approx. 15 ft above the ground. 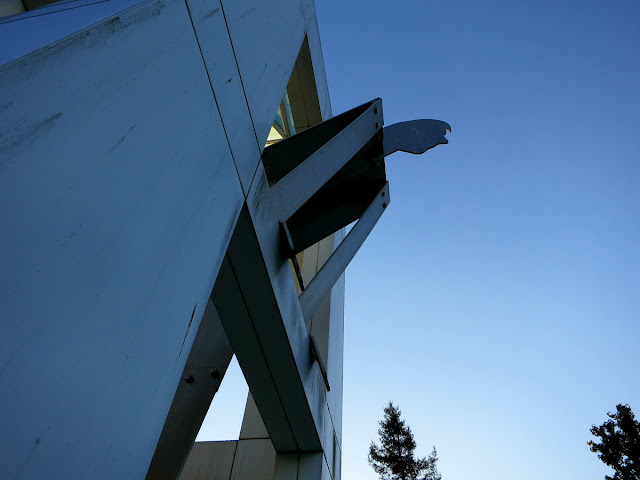 A sign identifying two of the office buildings.  All Google offices have a sign like this, in some shape or form.  It makes navigating the complex campus much easier. 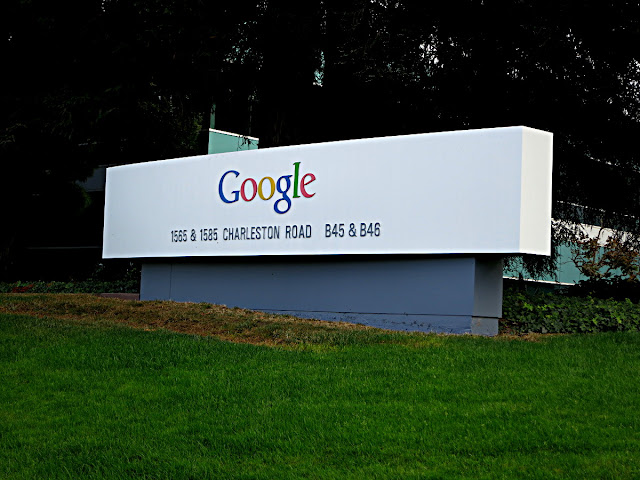 The Google logo on B43, in the main complex. 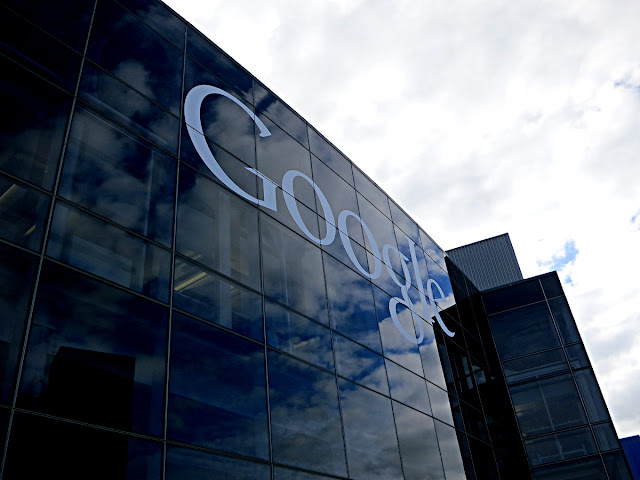 The patio outside Building 40.  Behind the large glass wall is the main cafe on campus, Charlies.  Named after one of Googles first cafe chefs, Charlie Ayers, who previously cooked for the Grateful Dead, and now runs his own chain of healthy fast food restaurants in the bay area. 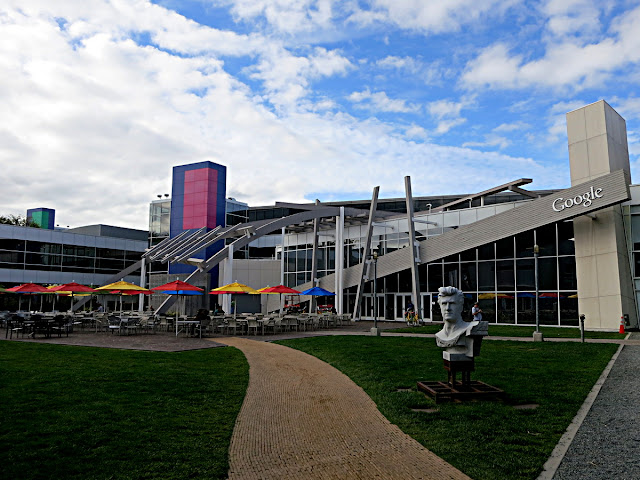 Since the campus is so large, and meetings (or lunch) are often in other buildings, Google has provided a large fleet of bicycles for Googlers to use, called gBikes.  They are painted in bright Google colours, and are often found at various entrances to buildings. They are free for use by any Googler who needs to use it to get to another part of campus. 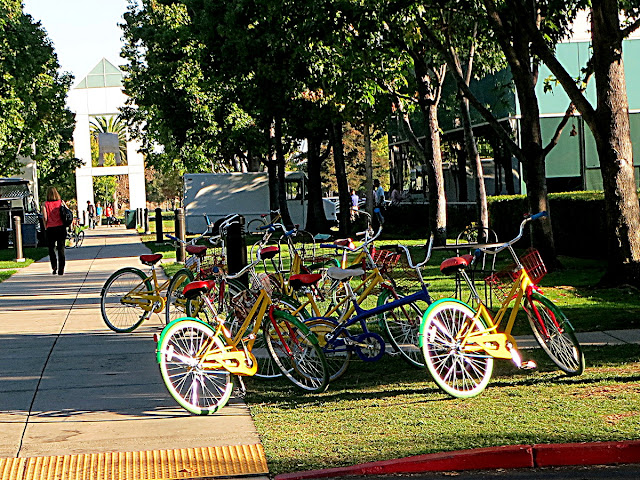 In the courtyard of the main complex lives a t-rex named Stan, the moralosaurus.  No one knows where he came from - he just showed up one day, but the rumour is it was a gift to the company from the founders, Larry and Sergey. He also makes a great home for a flock of flamingos. 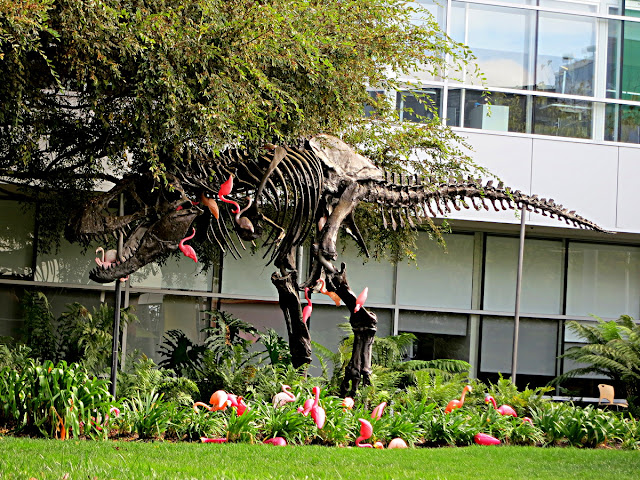 Posted by Dave DeBaeremaeker at 4:37 PM

hi there -love the pics. i would love to share this on one of my blogs. full credit to you, of course.
let me know what you think.
thanks

I really enjoyed looking at these pictures. I always think that companies that have large campuses should provide bikes for workers to get from building to building.