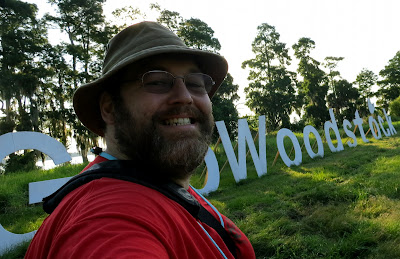 On Saturday I had the pleasure of attending one of the classic geocaching events out there: GeoWoodstock.

GeoWoodstock is an annual event that brings thousands of geocachers from around the world to one location for some peace, love, and geocaching.  This is the 11th GeoWoodstock, and the third one I have attended.

The location for this years event could not have been more perfect.  It was held at Circle B Bar Reserve in Lakeland, Florida.  The reserve has a wide range of interesting terrain (swamps, oak hammocks, marsh), plants and wildlife, including lots of birds and alligators. 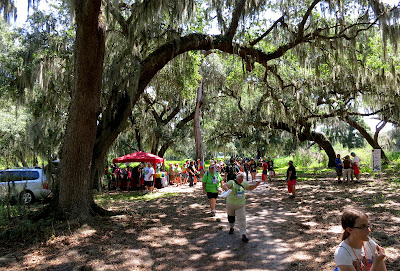 I arrived extra early for the event so I could hike the trails before the event started so I could be sure to see some gators, and find some caches before the crowds arrived (at events like this there are so many cachers that there is almost always someone already at GZ when you arrive, so caching becomes the much easier, but much less fun, "pass the cache" instead of having to hunt for it yourself).  I was not dissapointed, but I will share the details of the wildlife I saw in another post, as this one is about the event itself.

The event was held under the oak hammocks (the large oak trees with the hanging mossy bits), which provided a lot of shade for all concerned (tho I was disappointed to discover that the word "hammock" in the name seems to be more honorary as I didn't see a single decent place to take a nap on those trees).  The bugs were light, the weather warm but not melty, and the breeze welcome.  It was a perfect day for hanging out with a group (herd? bunch? conspiracy?) of geocachers. 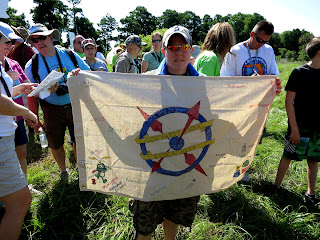 GeoWoodstocks are chock full of activities, and one should never find themselves bored if they are paying attention to the schedule.  If all else fails one could fill the day by finding the large number of caches hidden on the reserve. There were too many things for me to check out, but I filled my day with geocaching and getting re-aquainted with friends.

Since this is my 3rd geowoodstock, and I have done some extensive travelling, and various other things with geocaching (blogging, podcasting etc.) I knew a surprisingly large number of people at the event. Some were cachers I've met at events in the Carolinas, some were friends I've met before at previous Woodstocks, some were fans, some were fellow bloggers and podcasters, and some were folks I've only chatted with online.  This is the (brotherly) love part of geocaching. 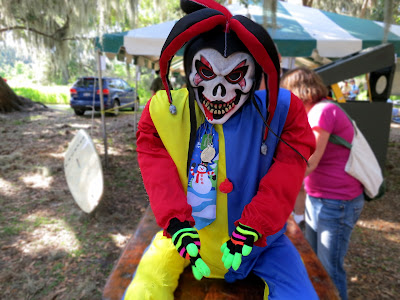 There was a side event held this year for the +Geocachers Unlimited group on Google Plus.  These are folks that enjoy caching on alternate listing services, including +OpenCaching North America.  It was great to put faces to these folks as I had previously only known them online.  It was nice to be able to log an event inside an event (an event sandwich, if you will).

Another aspect of GeoWoodstock is collecting trackables and travel bugs.  It still amazes me how many things have trackable numbers on them.  Geocachers love to track things (cars, t-shirts, toys, insane clowns... you name it, it can be made to be trackable). I logged over one hundred trackable objects, and I wasn't even trying that hard. Some trackables, like this jester, are very large.  Others are small and portable. 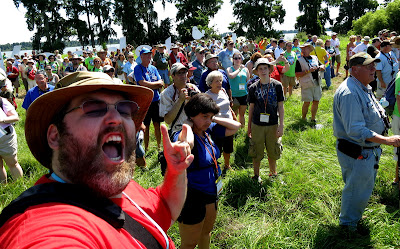 One of the traditions of GeoWoodstock is the group photo.  It is one of the few places at the event where you get a real sense of how many people are in attendance.  It was taking a bit longer than expected to gather everyone around for the photo, so I took a shot of my own.

This years event was spread out under the trees (which was done on purpose to allow folks to enjoy "more of Florida" - true statement from an organizer :) .  In a way this was a tad annoying as it took extra time to travel from location to location. 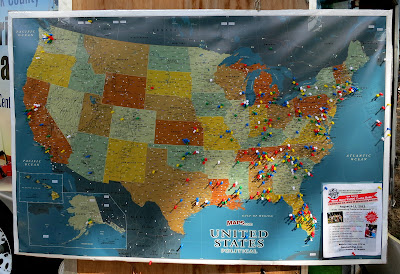 On the other hand it was rather awesome as the place did not feel crowded, despite having a couple thousand(ish) cachers in the park, and I got to see more of the place than I otherwise would have.  So mission accomplished.  Also goes to show its the little things that make an event rock or not.

People from literally all around the world attend this event. I found one cache with a lovely couple from Dusseldorf Germany, and traded pathtags with a gentleman (TickleBrick) from the UK. A map board is provided so everyone can mark where they come from using a straight pin. 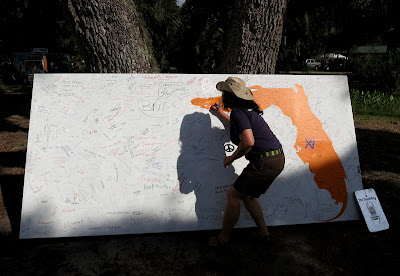 I was so busy this year I almost forgot to sign the log.  It was one of the last things I did before leaving for the day.  Every year they use something different for the log sheet (one year it was an actual log).  This year it was a giant canvas.  I grabbed a shot of MissJenn, a Groundspeak Lackey, singing her name on the log (which seems to show I wasn't the only one who was late in this important task).

I had an awesome time at this event, and I am already scheming and plotting ways to convince my wife to get me to go to next years event, which will be held in St. Charles Missouri.

I highly recommend you consider attending one of these events.  If the next one is anything like this one, it will be one of the highlights of anyones geocaching career.  Until next time... 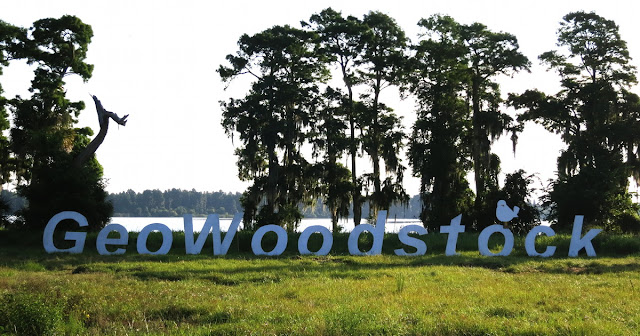