Photography Scavenger Hunt Round 30: Twenty One

This is a behind the scenes of my "twenty one" shot for the 30th round of the Photography Scavenger Hunt.

The first thing I thought of when I saw this word was the federal drinking age in the United States of America of 21 years of age.  I immediately thought of a fake ID. I figured a lot of people would come up with the same idea, but it was the best of my ideas so i went with it (turns out I was unique - yay).

The trick to this shot was coming up with an action figure that would plausibly be flashing a fake ID to get into a bar.  I didn't have any child or teenage figures.  Then I remembered my life sized Baby Groot figure, which was on the mantel in the living room.  This was over the Christmas holidays so he was doing his part to liven up the place by wearing a Santa hat.  I immediately press-ganged him into working as my model.

I created a fake ID for Baby Groot in Photoshop and printed it off on cardstock.  I really wanted to sell the idea of a fake ID, even to people who are not familiar with the character, so I made the ID intentionally and obviously fake.  Since he was a baby, and kids are horrible spellers, I intentionally made spelling mistakes to sell the fakery.  I, of course, used an image of adult Groot, and most of adult Groots stats from the Marvel Cinematic Universe Wiki. I did change the eye color as its listed as yellow in the wiki, but the figure clearly has brown eyes. I also made him an organ donor, cause he seems nice like that. (Also, lacking organs, a pretty committal thing to agree to.)

After that I posed Baby Groot to look like he's flashing his ID up at a bouncer, and the rest is my simple regiment of post processing.  The final image is thus: 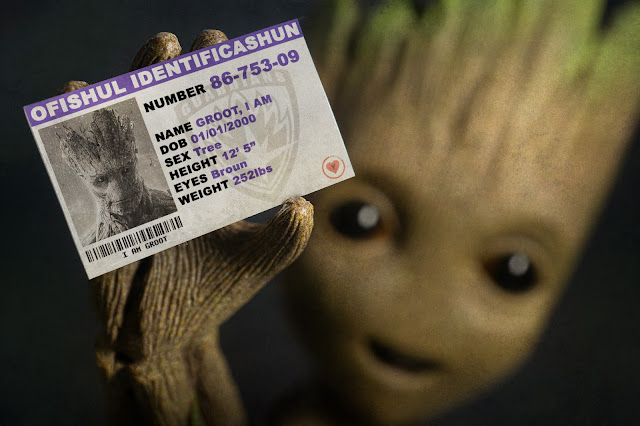 Posted by Dave DeBaeremaeker at 7:25 PM