This is a behind the scenes of my "antique" shot for the 30th round of the Photography Scavenger Hunt.

I had some issues coming up with ideas for this one.  So many things can be antiques and, photographically speaking, I am not interested in very many of them, and those I am are not accessible in the lockdown.

Just out of pure luck I received an Iron Man Mark I action figure in the mail. If you are an Iron Man fan this is the suit of armor that Tony Stark built to escape that cave of terrorists in Afghanistan in the first movie.  (If you are not an Iron Man fan, picture in your mind the sort of suit of armor a genius billionaire playboy philanthropist would build to escape a cave of terrorists in Afghanistan).  I had forgotten I had ordered it.  It was a pre-order just as the lockdown hit so its been a while and I forgot about it. I was suitably surprised when it showed up.  It was, however, perfect for this shot, so thanks past me!

I posed him with a simple standing pose and simple overhead lighting.  In post I added the glow of the Arc reactor (the chest thing, where the armor gets its power).  I kinda actually dig this shot all on its own, but it doesn't really sell as "antique" to me, so further post processing is required. 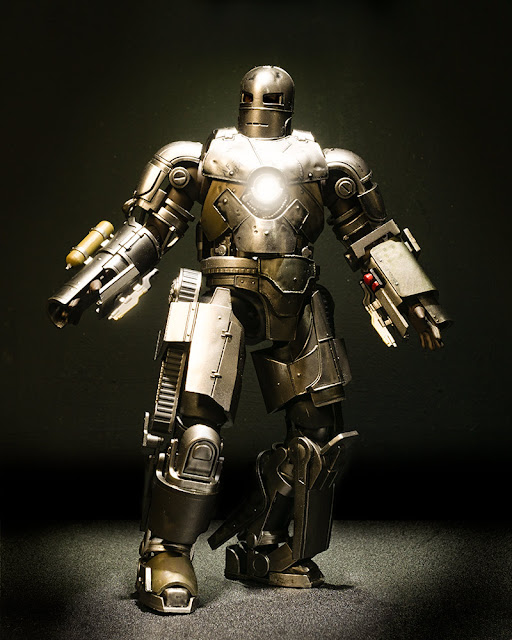 To get that old photo look, I used several grungy and papery textures and blended them together.  Some of those textures added the scratches and worn edge look, others added a faded grainy look.  Finally some colour grading was used to make the whole thing look yellowed, like an old photograph.

My wife had the idea to add fold lines, which really sold the piece as being worn from use, at least I think so. 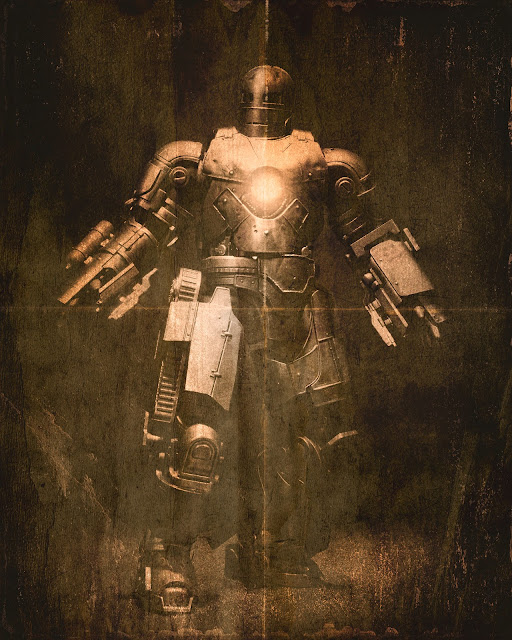 Posted by Dave DeBaeremaeker at 5:55 PM