So it turns out that my resin 3D printer has developed a problem.  Part of the UV screen has stopped working, making the right 40% of the build plate unusable.

This is problematic in general, but specifically it will make finishing the dragon print, which has many large parts that barely fit onto the entire build plate, impossible until its fixed..

I can replace the screen, tho it isn't exactly cheap. It also looks like a very fiddly process, and I'm not in the mood.  So I am debating taking the opportunity to spend a bit more money and upgrading my resin printer from a 4K to an 8K model.

In the mean time I have decided to press my filament 3D printer into service.  The dragon model has 4 parts that make up a base.  The filament printer has a lower resolution (0.07mm instead of 0.05mm), which is problematic for the dragon itself, but is not such a big deal for terrain. Truth be told I am thinking about the idea of making my own terrain for a larger base, and skipping the supplied one.  I am waiting to see what it looks like printed first before I decide.

The filament printer is a lot slower (2.5 days to print a part instead of 12 hours), but I have time, so it's not likely to slow me down much.

The 8K printer arrives on Monday. 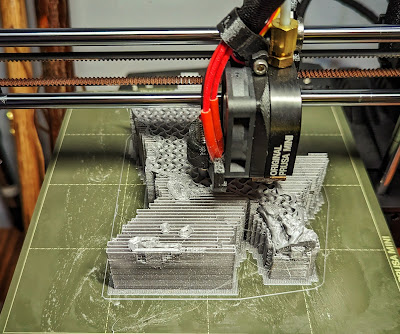 Posted by Dave DeBaeremaeker at 9:01 PM