Canadians, it seems, like haunting tunnels.  Today I went on an adventure to complete a multi-cache at the Blue Ghost tunnel in St. Catharines, ON. 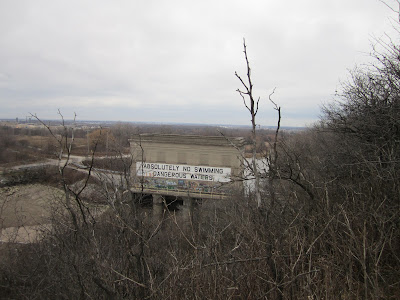 This is actually my second attempt at this cache.  We tried to get to the parking coords a couple days ago, but were thwarted by a big fence across the service road running to the cache that said, basically, go away. The road leads to a GM plant, and I guess they don't like visitors.

We were with a bunch of people, including a toddler, so we didn't want to spend a lot of time trying alternative access methods, so we decided to head off to do the Screaming Tunnel cache instead.

I really wanted to see this tunnel, so I did some map research online and made another attempt today.

One thing that makes this cache hard to access is that it is sandwiched between several canals (basically its on a mand-made uninhabited island), so there are only so many ways to access this cache. Having one way blocked off really complicates things. 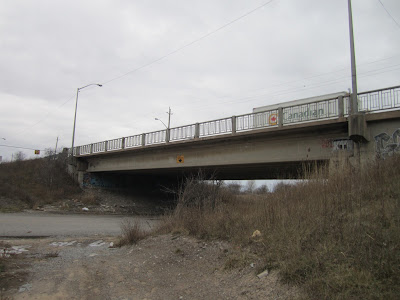 According to the logs the tunnel can also be accessed by parking at the cemetary to the south, and hiking around a resevoir and crossing at a lock.  So I started out using this as my starting plan.  I got to the cemetary and hiked along the trails a mile to the lock.

Unfortunately I ran into a wall... literally.  I needed to descend about 50ft along a pretty sheer rock wall.  There was a path of stone steps, but since I was a) alone, and b) have weak knees, I decided that way was too risky, so I aborted that attempt.  I scouted around the area, but I could find no other way to get down to the lock, so I executed a retro-grade maneuver, returned to my car, and headed over to where the road was blocked to see if I could find another way from there. 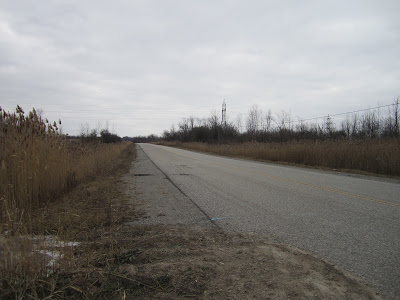 It seemed like I shouldn't be there, give that the road was blocked off so efficiently, however there were no No Tresspassing signs, and after being passed by several cars, including security, and getting nothing but friendly waves I figured I was good to go.

The tunnel goes under the service road I was walking on, so when I got to GZ I descended down a ravine and finally laid eyes on my goal:  The Blue Ghost Tunnel. 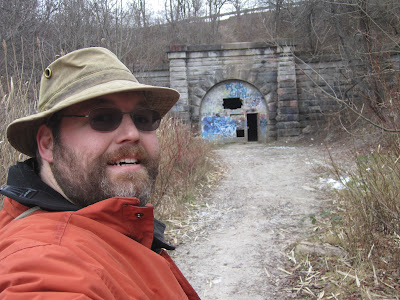 The cache didn't require going into the tunnel, but I went in anyways. The tunnel is 667 feet long, with a soft gentle curve.  About half way along the bottom drops off and is covered in what looks like deep water, so I only went that far.  I can definitely see how folks would think that this place was scary. Water dripping from the ceiling, dark, rough floor, damp, cold... the perfect setting of a ghost story.

The tunnel was build in the 1870s as a train tunnel to aid in the moving of goods between the various canals in the area.  Early in the 20th century,  there was an accident in which two trains collided just outside the tunnel, and many people were killed.  It is said that the ghosts of these people moved into the tunnel, and live there to this day. 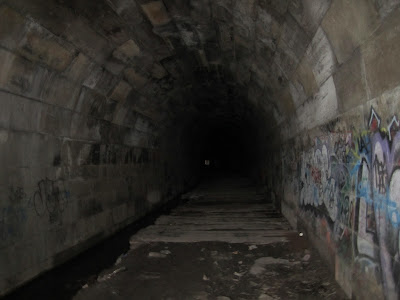 After I returned to daylight I set about finding the first stage of the cache, and quickly came up with the container.  The new coordinates sent me away from the tunnel and off into a field about 400ft away.  So off I went up the side of the ravine, into the field, and found the final cache.  Victory!

I spent a bit more time exploring a lock nearby, then made the hike back to my car and drove back home.

This was an absolutely amazing experience, and if you are in the area, I highly recommend the Haunted Blue Ghost Tunnel Cache.


I'll leave you with some more images from my adventure:

Posted by Dave DeBaeremaeker at 4:01 PM

That's awesome! And scary :o keep it up!

Another great sounding cache that I just added to my list!

Great background info on the caches... and spooky. I'm surprised the tunnel is even left accessible!

Creepy, scary and I love it! Great job Dave! You nailed this post and captured the detail perfectly!

Awesome post, Dave! I was just discussing with a friend this morning about how I'm intrigued by abandoned structures. If you ever venture into our neck of the woods in Pennsylania, make it a point to visit Centralia. An underground mine fire forced the entire town out back in the 80's. All that's left is a town, nature is attempting to reclaim, and a lot of smoke coming from the earth.