The Ghost Town Of Joseph Balls

It is often said that the best part of geocaching is exploring places that one would never know existed otherwise.  The cache I am about to describe fits that saying exactly.

Back in the mid 1800s Scottish settlers started exploring the Niagara escarpment, looking for rock for building materials.  The quarry they started has been in operation since, and is the oldest one operating in Canada.

They built a small settlement of 14 houses nearby to house the workers.  Todays cache, a two stage multi-cache called "Ghost Town", would take me to the old ruins of one of these houses: the residence of Joseph Balls.  The hard part is getting there.

The closest parking is a half mile away, which doesn't seem like a long distance, but the Niagara Escarpment stood in my way.  The escarpment is several hundred feet of steep hillside, but thankfully I only had to climb about 80ft of it.

The trail was as straight and as steep as possible and still allow it to be climbed without ropes, so up I went.  When I got to the top I consumed an entire bottle of water and took a rest.  I was exhausted, but I reminded myself that climbing the escarpment was the very thing that cost the Americans the Battle of Queenston Heights during the War of 1812, so I didn't feel so bad.

At the top the trail intersects with the famous Bruce Trail (885KMs of trail that runs from Tobermory ON to Queenston ON).  I started down this trail and almost immediately saw signs of the settlement.  It looked like a basement dug into the ground.

A quick check of the GPS showed the cache still being 0.3 miles away, so I keep going.  I see other signs of quarry work as I go.

About 0.1 miles away I see a little-used foot path snake off into the woods on the left. The GPS compass is pointing in that general direction, so I leave the Bruce and head across country. 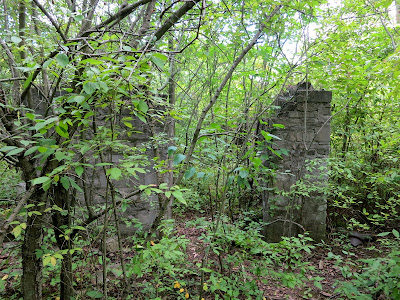 Almost as if by magic the ruins of an old stone building appear out of the thick underbrush.  This is ground zero.

The ruins consist of one entire wall, with two side walls ending about half way down.  The fourth wall is missing entirely.

I spent a few minutes grabbing photos, and finding out the information I require to solve the puzzle to get the coords for the next stage (some initials carved in the brick).

Once I locate the info, I do the requisite math and headed off about 300ft to the final. 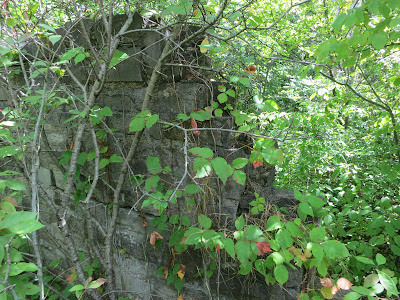 When I got to the final I found the geocache opened, and its contents strewn about.  I am not sure why it was this way - most of the contents, including stuff a muggle would take, was still there, and there was no signs of animal teeth or claw marks.

Amazingly the log book was still in great shape, despite sitting on the forrest floor unprotected for who knows how long.  I signed the log, reassembled the container, and hid it back where I assume it was meant to be hidden.

My mission accomplished I started to program the GPS to take me back to the car, when I accidentally hit "Find closest cache".  One popped up 0.3 miles further down the trail.  I was about to ignore it when then name caught my eye  It was simply called "Geocache", which seemed rather basic and probably meant it was an old hide.  Sure enough the publish date was March 17, 2001.  This cache was placed during the first year of geocaching!   Naturally I decided to go after it.

[Editors note:  Research shows that this is the 6th oldest geocache still active in Ontario] 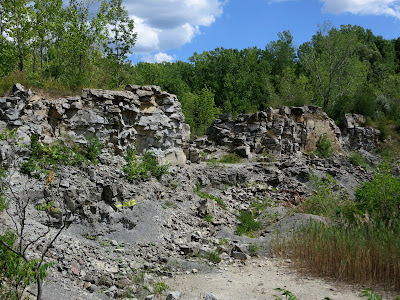 I am glad I decided to find it as it dovetailed perfectly with my original story, the ghost town cache.  Along the way I found the actual quarry.  I also found the geocache (tupperware in a tree stump).

Finally satisfied that I have accomplished an additional mission, I hiked the (now) mile back to the car, including that tricky descent down the steep escarpment trail, and arrived back at the car.  Exhausted, sore, but thrilled that I had just had what could easily be described as the quintessential geocaching experience, and I survived to tell the tale.


Posted by Dave DeBaeremaeker at 10:16 PM