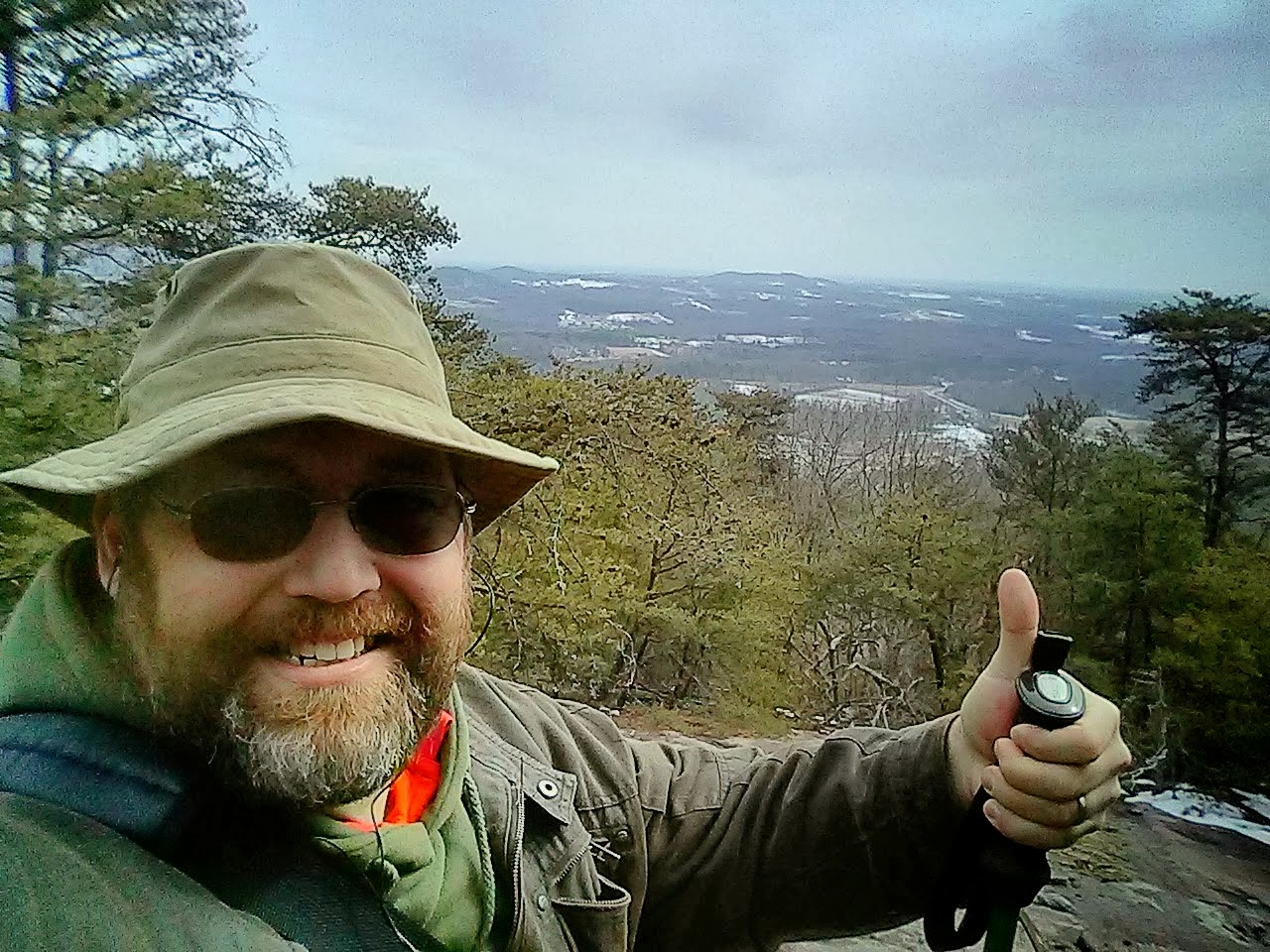 Thanks to General George Washington beating the British to the First to Find on the United States Presidency, and the modern times celebration thereof, I had the day off work (thanks George!).

I decided to head over to Rocky Face Mountain Park to clear out the four geocaches that were published there since I cleared it out early last year.

So I loaded up Bailey the wonder puppy into the Geovan of Destiny and headed 30 miles east to the park.

When I got there a park ranger informed me that one of the trails was closed due to ice and snow on the trail.  This wasn't a problem for me as the caches I wanted were not on that trail, however it did highlight a theme for the day, which is dealing with snow. 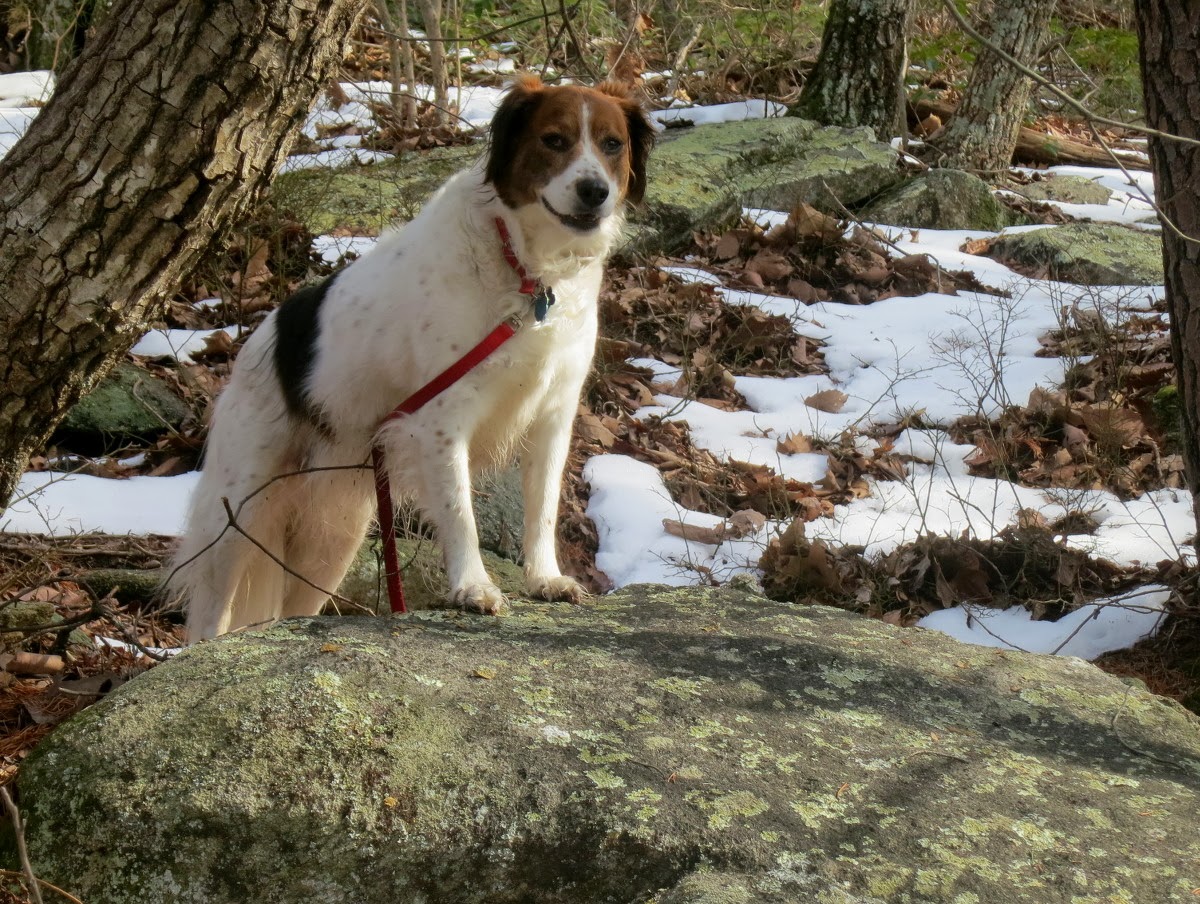 Not just snow - melty snow.  The worst kind for slipperiness. It is basically walking on wet muddy hillsides with some frozen water on top.

Not letting such things daunt me (cause life is too short, and with care, such things can be safely overcome - indeed the entire day I never slipped out of control), I started down the trails to the first cache.

The trail I took was indeed snow covered, but not that bad.  When I went off trail to go to GZ I had to slide down a snowy embankment, but I stayed on my feet the entire time.  All in all it went well. 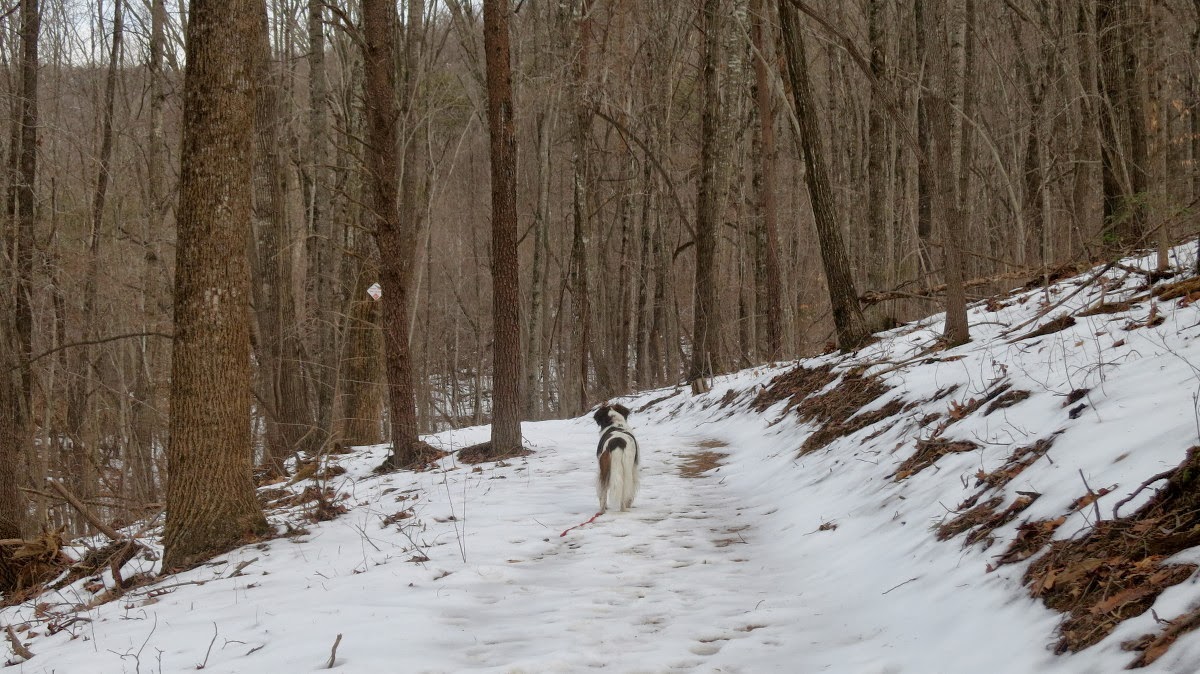 The rest of the caches were up the mountain.   0.5 miles as the crow flies, but 1.5 miles after all the switchbacks the trail takes to wind up the side of the hill. 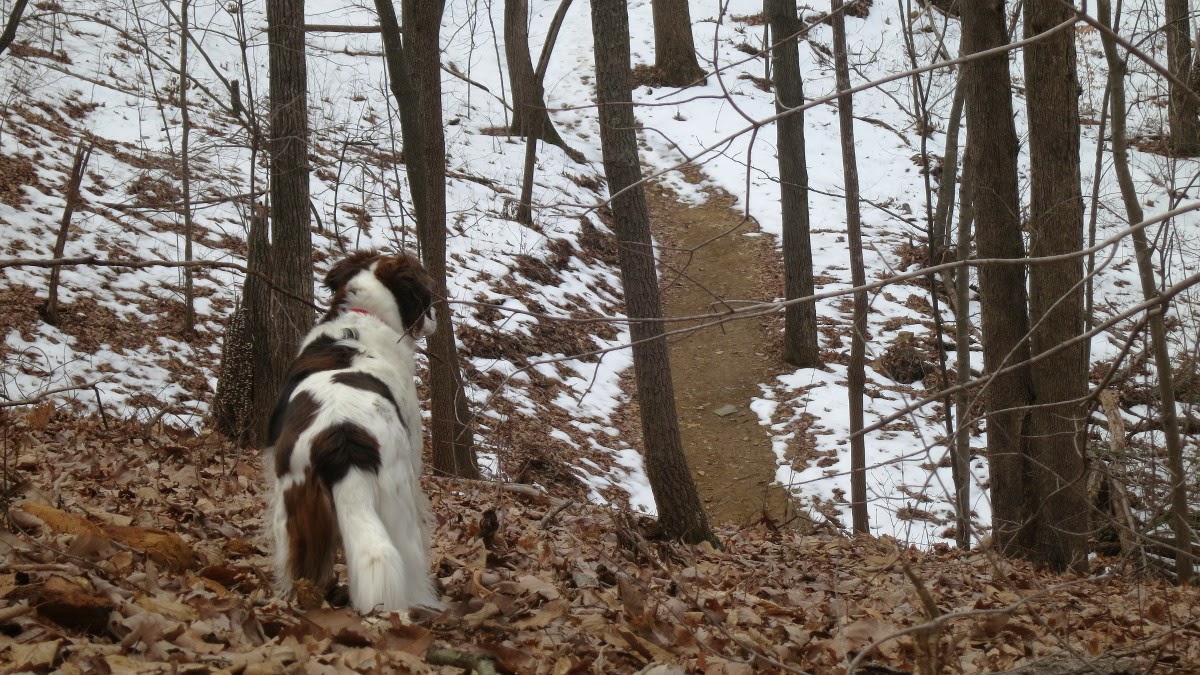 The third cache was 800ft off the trail, down the hill, and across some rocky outcroppings.  Due to the melting snow the rocks were quite wet in places.  I carefully worked my way across the outcroppings to get to ground zero.  What would normally be a 10 minute stroll through the woods took twice that.  It was a lot of work, but I was rewarded with a log sheet to sign, and a lot of awesome views. 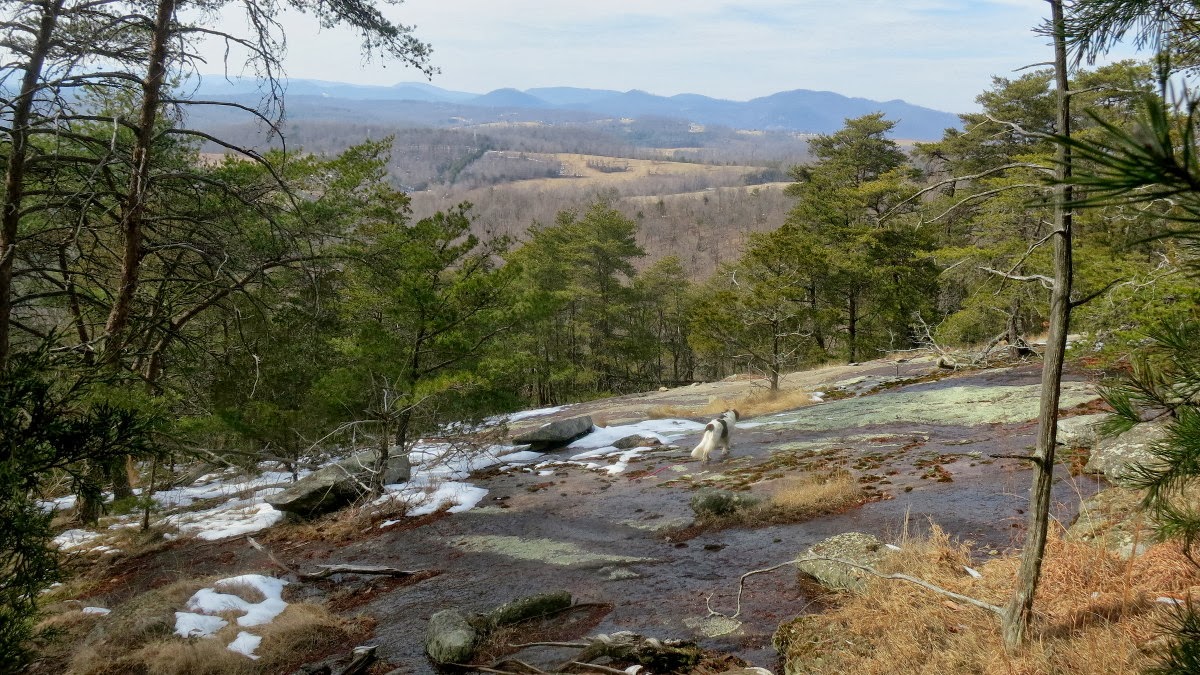 The cache also contained the coordinates to a bonus cache - which is posted as a puzzle cache with coords in the parking lot.  The cache is actually near the summit, conveniently on my way back down, so off I went.

The final for the puzzle was also about 800ft off the trail, and down more hills and rocky outcroppings.  I spent a good 30 minutes gingerly picking my way through the maze of wet rocks, snow patches, fallen trees, and other obstacles, winding slowly down the hill, seeking out solid footholds as I went.  This was a proper terrain 4 cache, so it was already challenging - the snow made it that much harder.

It was actually quite tiring and a little nerve wracking at times.  However I made it to GZ without major injury to person or pride (actually, major increase to pride).  Once there I quickly found the geocache, signed the log, and put it back. 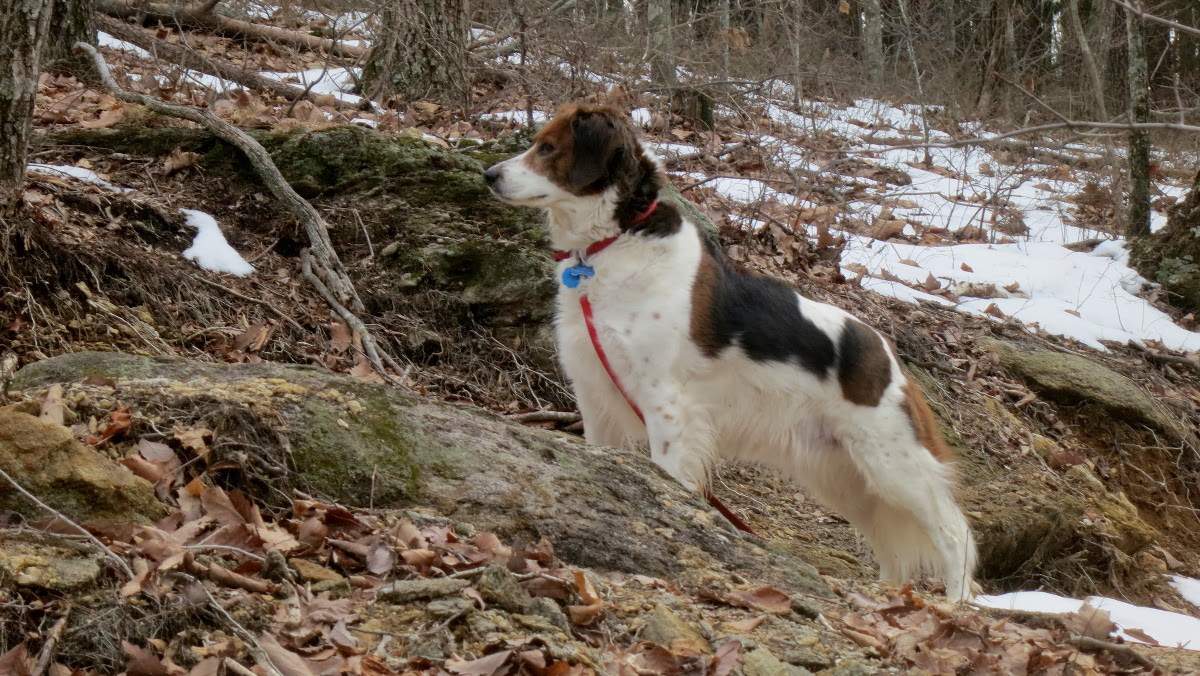 The rest of the trip was simply walking well marked yet slightly snowy trails back to the van.

Oh, if you ever wondered why the place is called Rocky Face, this is the view from the parking lot.  It is the face of an old quarry.

So that was my day.  As days go, it was tiring, but a great deal of fun (good times were had by all furry creatures, both two and four legged). I walked 4.5 miles, and found 4 caches (which is 1.1 MPG (miles per geocaches), not to shabby).  I'm just kinda sad that there are no more caches in this awesome park to find.  Maybe a local will fix that for me (there are a few spots left near the top...).

If they get published, I'll be back.
Posted by Dave DeBaeremaeker at 8:45 PM