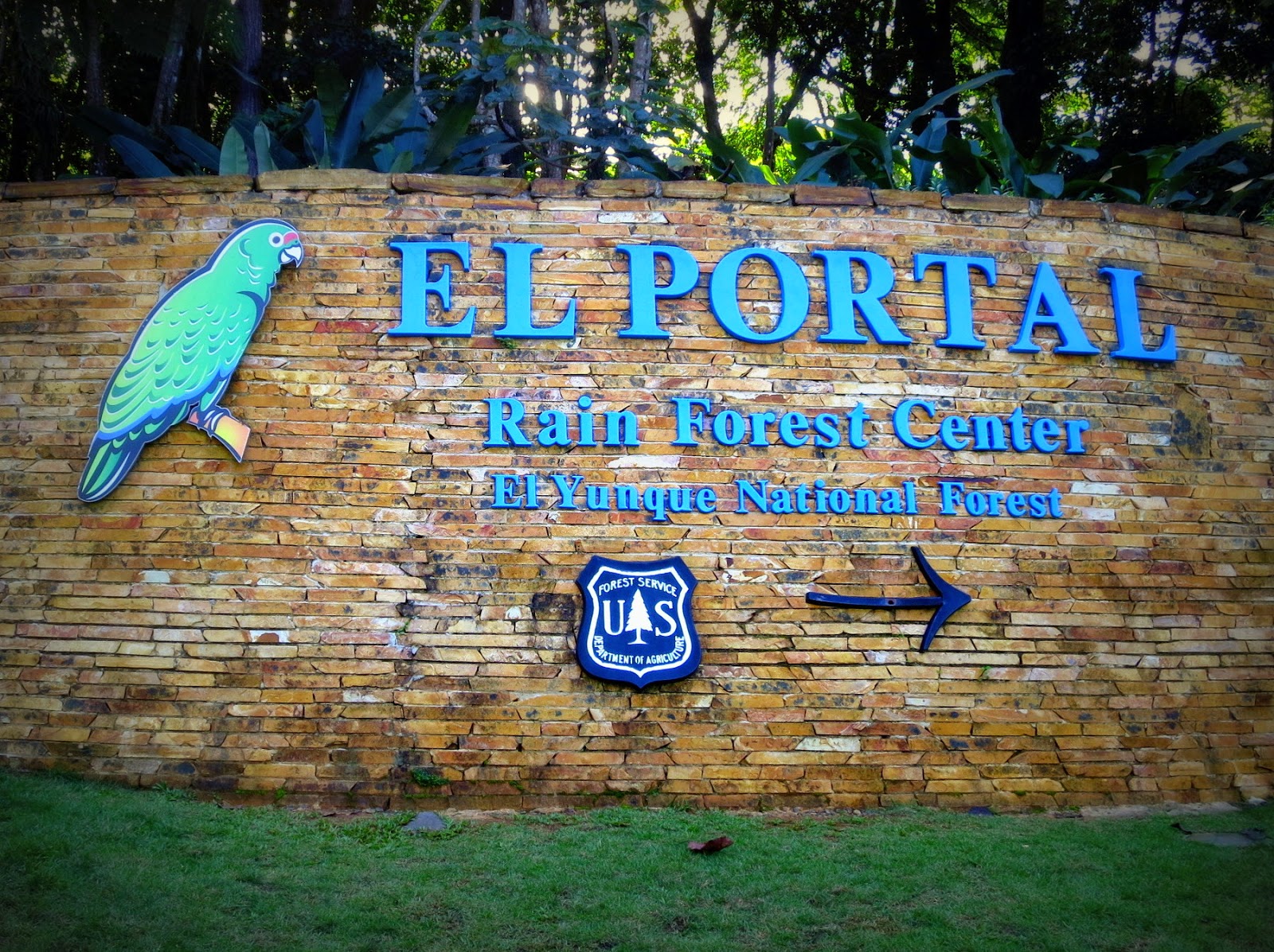 On Tuesday I told the story of how I found my first geocache in Puerto Rico.  At that time I mentioned that there was a more interesting story to go along with it.  This is that story.

To set the scene, lets start with the plan, which was this:  As part of the work retreat, one of the planned activities was to take a bus to El Yunque National Forest. We would take a large bus to the main gates of El Yunque, at which time we would switch to smaller shuttle buses to take us up the tight windy road to the information center, and the source of the trail heads.  From there we would hike up to the peak, and get ourselves an amazing view of Puerto Rico. We would have roughly 6 hours in which to hike the 4 miles of trail, and return to the shuttles, which would start us on our return journey.

So we (myself, and 33 others), boarded the big bus and headed towards El Yunque.  When we got to the main gates we were informed that no such shuttles exist, and should we want to get to the peaks, we'd have to hike up the 3 miles of steep, windy road, and hike back down them, as well as hiking the trails themselves.

Most of us immediately abandoned hopes of reaching the peak, and set about planning to make the best of our situation. I say most as 3 of us decided to run up to the peak and back.  However that way lies madness for most mortal folk, so we settled for what could be reached at a good walking pace. Luckily there were several features, observation towers and waterfalls, that were accessible from the road, or down shorter paths, so there were still many things worthwhile to see.

However this was the only view of the peaks we were going to get that day. 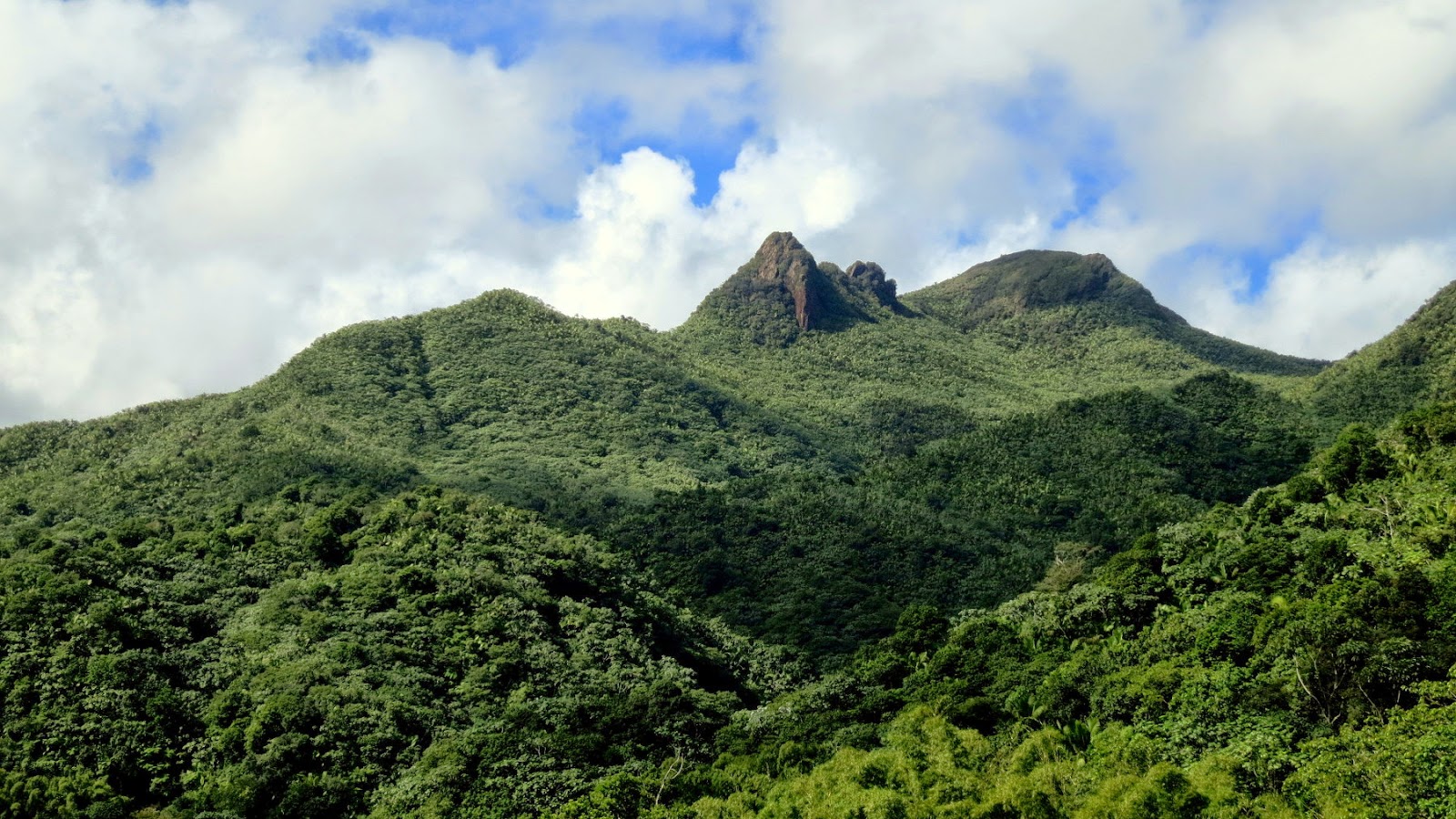 So we started hiking.  As is normal with large groups, we soon found ourselves separating naturally into smaller groups based on the speed of individual hikers.  I had lingered to find the first geocache of the day (it was by the sign near the front gate), so I quickly fell behind.  My team mate, Joel, had spent some time scouting out other possible transportation opportunities at the nearby nature center, but was unsuccessful.

So we ended up behind everyone, and hiking together up the steep windy roads.

We were passed by many cars and small buses from other tour companies, but we were left hiking up the side of the road.  It is a little hairy as there is no side walk, and visibility around the tighter curves is very small at times.

On a whim as a car passed I stuck out my thumb, in vain hopes of catching a ride from a kind soul. Surprisingly that car stopped, and the nice lady inside offered us a ride.

She was a research student, heading to a lab somewhere deep in the forest.  She took us approximately 2 miles (disclaimer: my memory of the distances in this post are a little fuzzy, but it felt like 2 miles-ish), and dropped us off at Yokahú Tower, where I found my second geocache of the day, and we got some cracking views (see the previous post for pictures).

At the tower, Joel and I hatched a plan.  We would hike up a half mile farther where a trail would take us to La Mina Falls, at which point we would either turn back, or if we had enough time left,  continue on that trail to the information center where we originally were to be dropped off.

So we started hiking up the road once again. I tried the hitchhiking trick, but several vehicles passed us by without stopping.  Eventually we arrived at a waterfall on the side of the road so we stopped to take some photos.  I stuck out my thumb once more, and someone stopped!

Turns out the fellow was named Alejandro, a tour guide, and he was on his way up to meet a tour group.  He offered to take us up the mountain, and as luck would have it, he took us straight to the visitors center.

Between these two ride we likely saved a good hour of walking, and a significant amount of our energy reserves.

So we were blessed with a little more time.  We decided to check out some of the trails immediately around the information center.  One of which is Baño Grande, which is a really nice pool, with a walk way around the outside, and a picturesque bridge.  Sharped eyed wives of mine may recognize this as one of the places we visited on a shore excursion during our honeymoon (yay for nostalgia!) 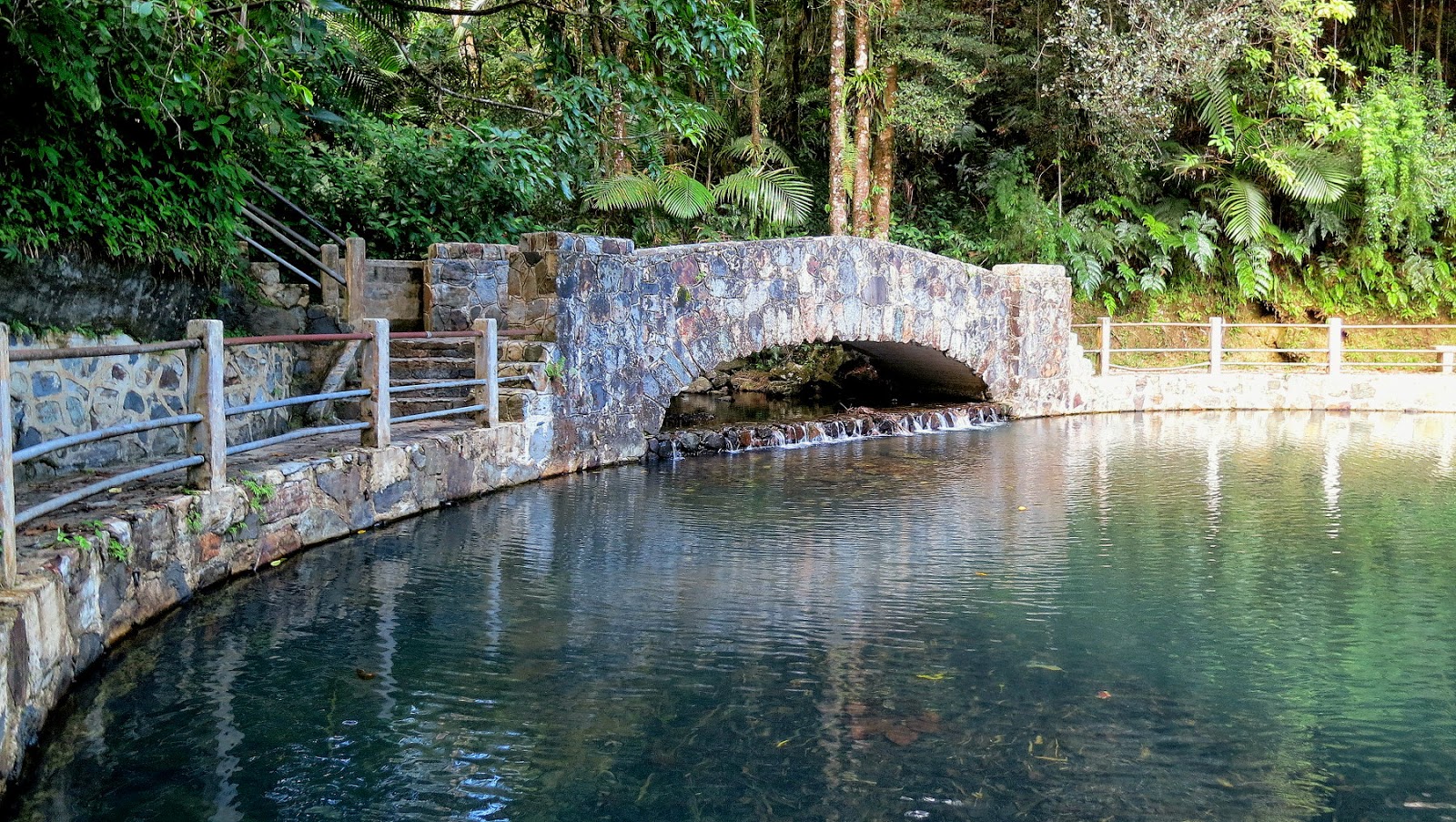 While there we also found the geocache in an old building located up the stairs to the left of the bridge (because why not?).

We had some more time to spend exploring before we had to start heading back, so we hiked 2/10ths-ish of a mile farther down the road, and down a short trail, to Baño De Oro.  This Baño was closed for landscaping maintenance (we think by a prison work gang, based on the armed guards - but armed guards are not unusual in Puerto Rico, but seemed odd in a park to guard landscapers, unless those landscapers were not at liberty to wander freely among society at large).

This baño is also at the very beginning of the trail we had originally planned on taking, so we at least got to see the starting point of our planned adventures, even tho we definitely did not have time to hike on them.

There was also an old building (an abandoned bathhouse perhaps?) at the location. 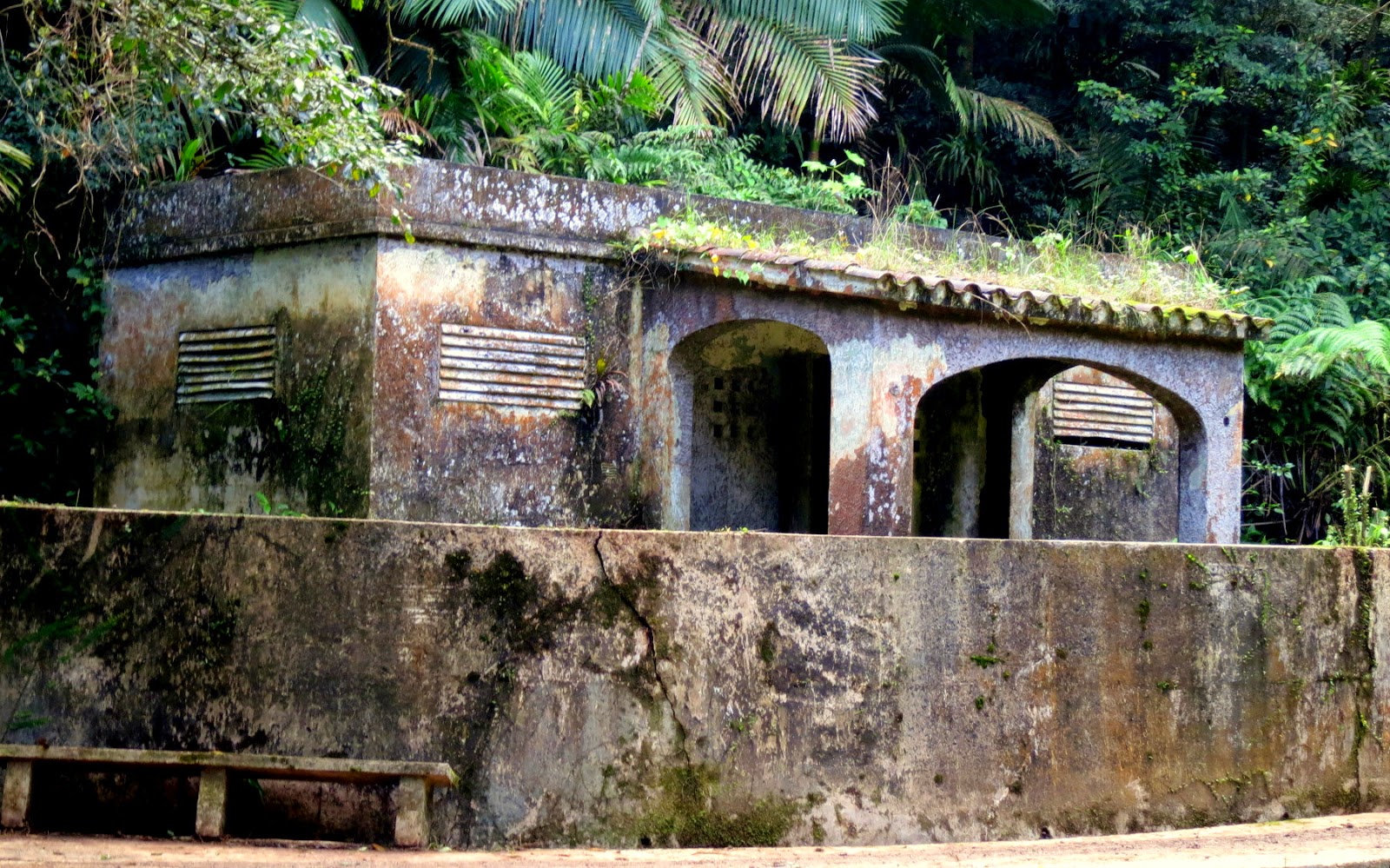 At this point we were out of exploring free-time, and we needed to start heading back down the mountain and follow the new improvised plan.  Fortunately the trail for La Mina Falls, that started a mile down the road, ended up at the information center, so we could resume our plan of hiking to the falls as part of the return journey from our current general location.

All of the trails we hiked were cemented.  Think an 18 inch cement sidewalk, with stones mixed in for some traction.  It seemed odd to me, but I guess with all the visitors El Yunque gets (100,000 a year), and the fact that it is a rain forest (it gets an average of 10 feet of rain a year) would soon make dirt trails worn and impassable.   I didn't mind so much as it made finding out way easy, and I didn't have to worry about wiping out on steep muddy slopes - instead we simply took the provided stairs.

The upper path followed the edge of a mountain stream, so we got some nice views of some small waterfalls.

We, of course, took lots of pictures. 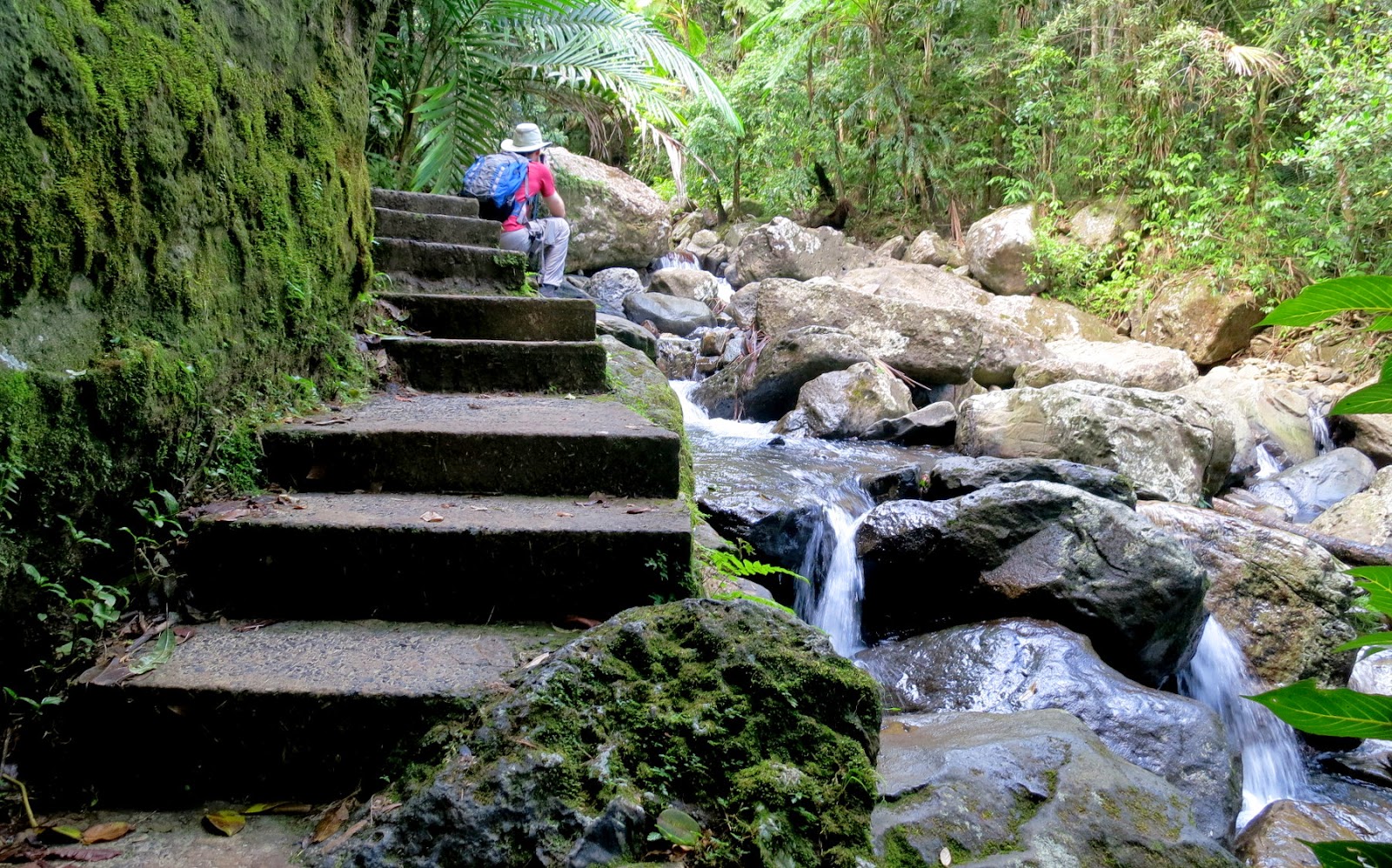 The hike down to La Mina Falls is about 0.7 miles, and we made good progress. Just before the falls was a conveniently placed geocache, which I took the time to locate (at this point I had found some caches, and given the altered plans of the day was content with the caches I had found, but one cannot, with a straight face, call himself a geocacher and not at least try to locate a geocache placed 20ft off a trail he was already hiking on that was taking him to such an awesome place - I may be crazy, but I am not *that* crazy).

We then paused to take photos of the falls.  As you can see they are quite beautiful, and became the highlight of my day. 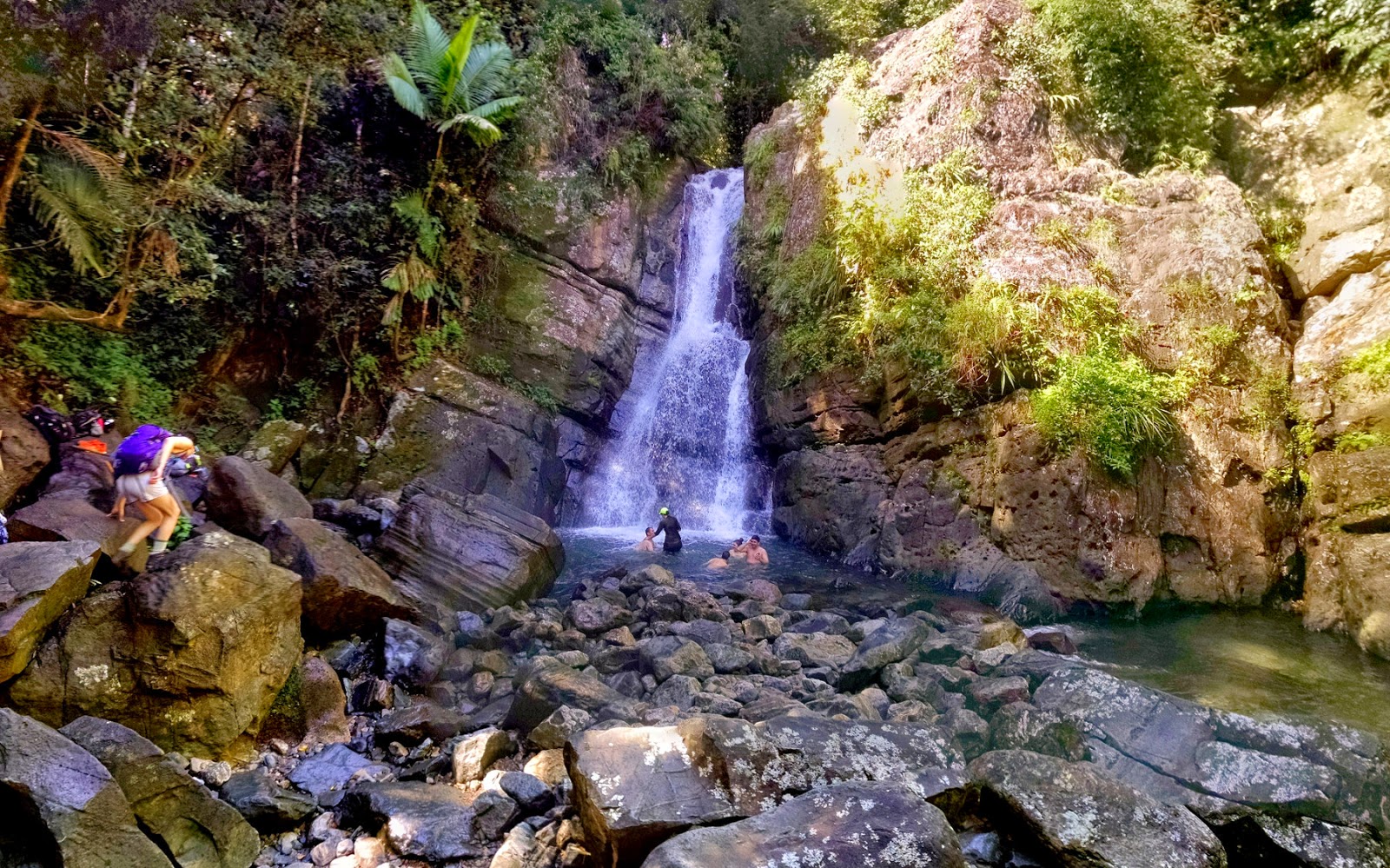 You cannot see it, but there is a bridge that the path takes over the river (where I took this shot from). As we stood on that bridge admiring the view, I noticed some familiar faces on the other side.  It turns out the rest of the group had arrived at the falls just as we did.  As a result we ended up all eating lunch together, sitting on the rocks in the foreground.

Eventually we decided to move on.  Most of the rest wanted to hike the upper trails that we just came down on, so Joel and I left them again, and started heading down the trails.  A distance of 0.8 miles or so.

Once we got to the end of the trail, we were left with walking down that steep windy road once again. 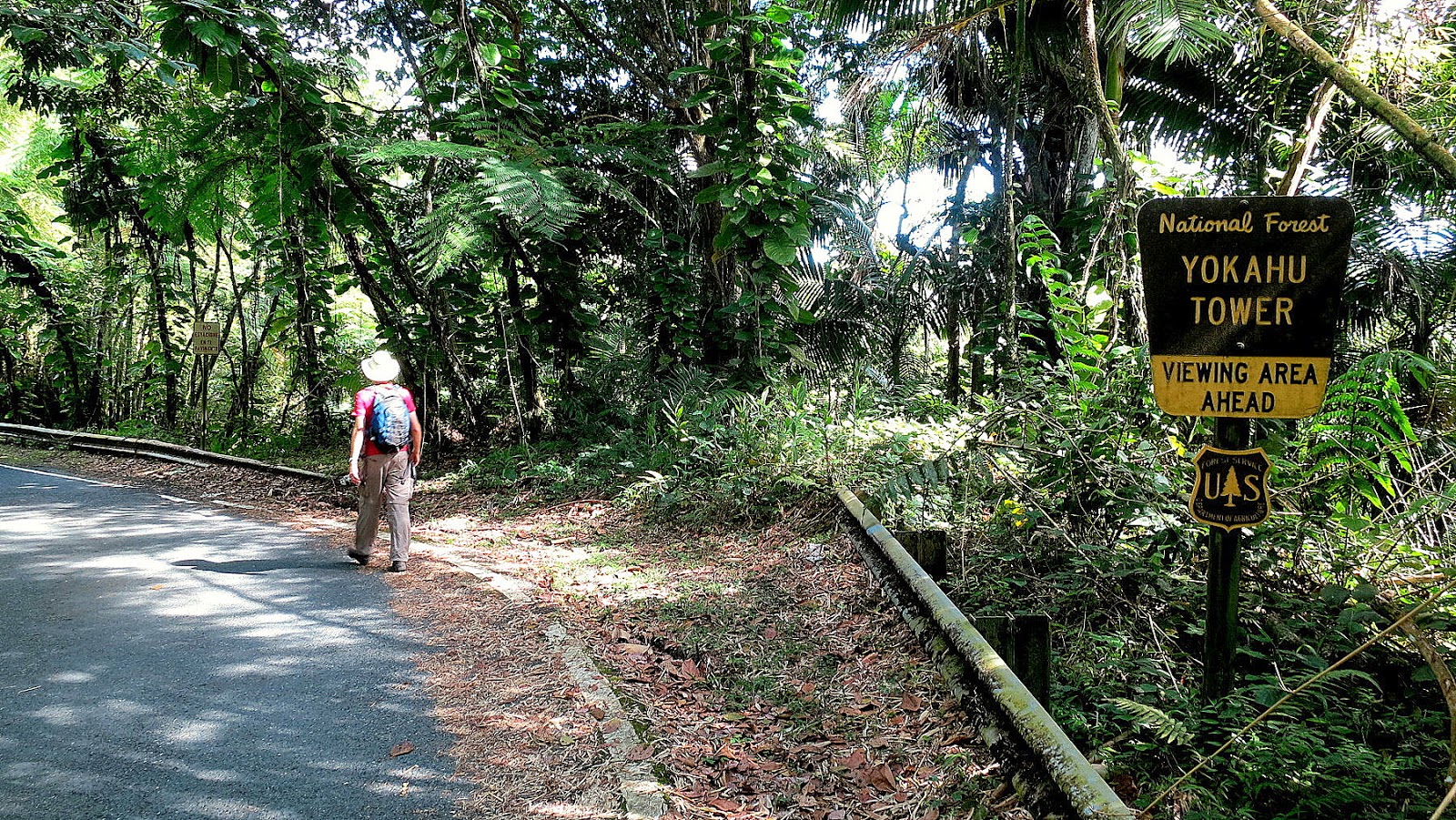 We ended up walking back at Yokahú Tower, where we took a rest, and took some more photos of the amazing views - the coastal town of Fajardo, in this case. 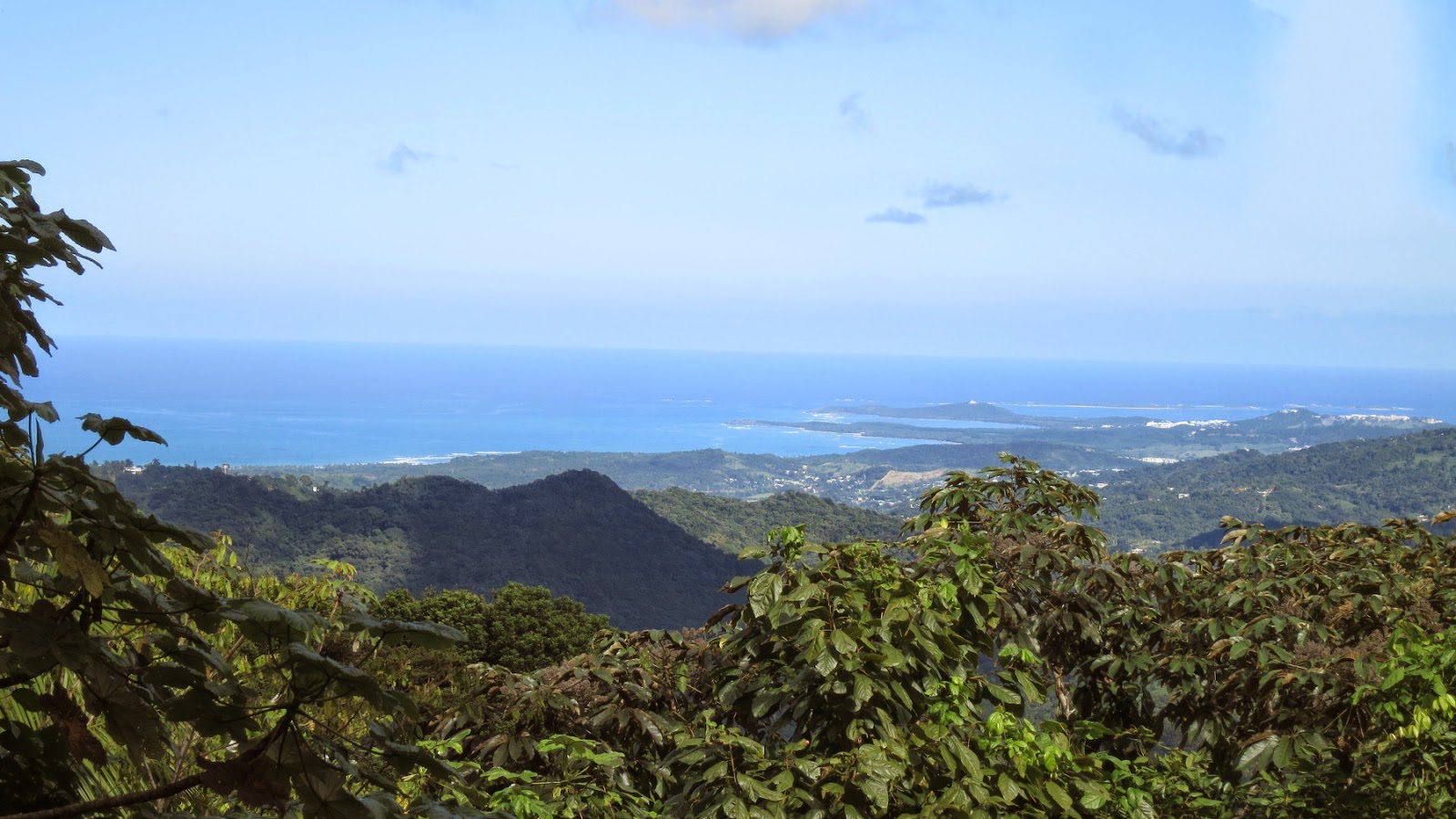 Sufficiently rested, we set off down the road once again.  We soon passed a road side restaurant (which we found odd, given such things are not normally found in national forests).  I did find it amusing that this forest was apparently sponsored by Coca Cola (though considering the name of our next stop, it may not be so odd). 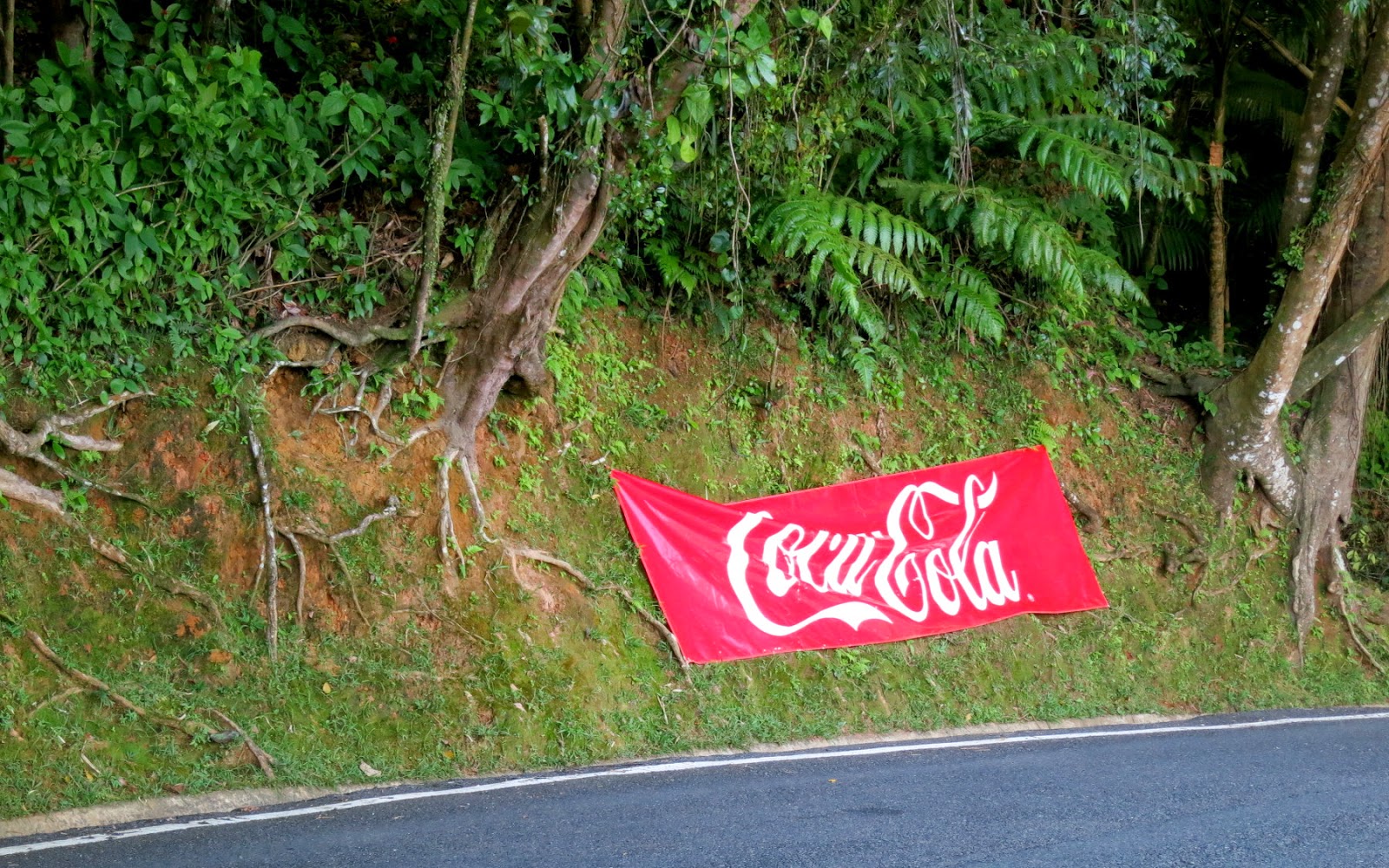 We kept walking another half mile or so until we got to the second nicest water feature in the park, La Coca Falls.  Somewhere around this point we were passed by other members of our group - they faster walkers apparently (bless their hearts).

There was, conveniently, another geocache here, so I set about finding it.  A tour group had just arrived so there were muggles aplenty milling about.  As I was hunting, hopefully nonchalantly, at the cache location (which I was sure off, based on the hint), and not having much luck, the tour guide came up behind me and tapped a rock, and gave me a knowing smile.  Sure enough under the rock was the cache.  Turns out many cachers come here on tours.  Its not often one has a tour guide for a cache, but beggars can't be choosers, so I signed the log and moved on.

We waited around for the majority of the tour group to disperse so we could take a few shots of the falls without people - tho we were not entirely successful.  Eventually we took what we could.  The people do give a good sense of perspective, however. 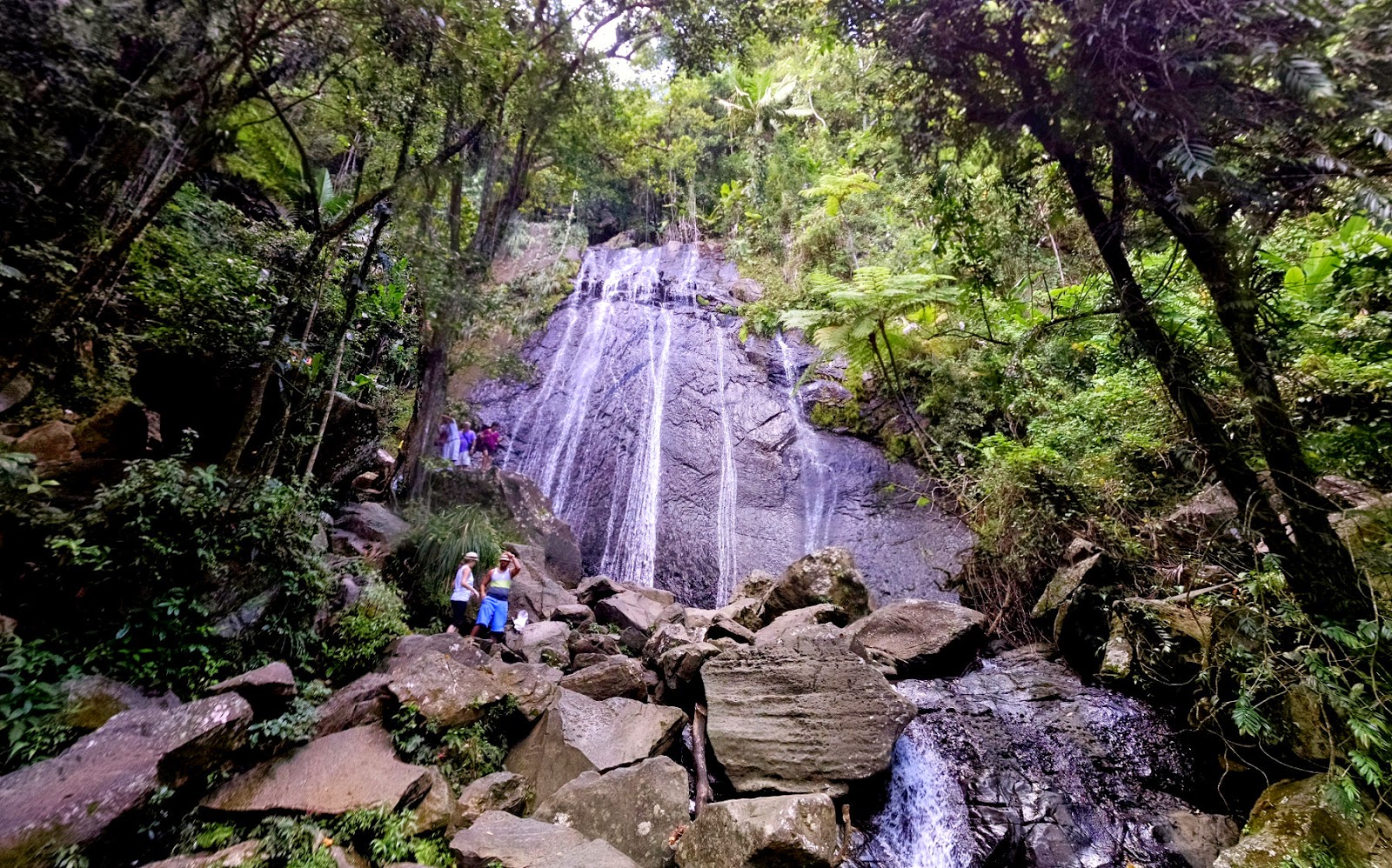 At this point we had about a 1.4 mile journey ahead of us down that same twisty road. Aside from there being another cache during the first 1/10th of mile stretch ( a simple guardrail - but with a stunning view, so I didn't care so much) the remains of this trip had no real interesting features or distractions, so we prepared to trudge on.

We got maybe 2/10ths of a mile (again, exact mileage is fuzzy, but that feels right), we stepped off the side of the road to let a car that was coming up behind us pass us by safely.  Surprisngly the car stopped instead. We were pleasantly surprised to discover that it was Alejandro!  He had finished his tour and was on his way home when he saw us trudging, and offered us a ride back to the main gate. We, of course, accepted graciously.

Having arrived early, we laid down on the grass by the main gate and took a well deserved rest.  15 minutes or so later the group that had passed us near La Coca Falls also arrived at the main gate.  When they asked how we beat them back, my simple answer was "We took the Alejandro Express."

I am really happy we ended up turning our disrupted plans into what was, in the end, a very memorable experience.  I didn't end up hiking to the top of El Yunque peak as I expected, but I did ended up with some decent photos, explored some awesome wonders of nature, and came away with a great story to tell.  Really, when it comes down to it, that makes for a wonderful way to spend a day.
Posted by Dave DeBaeremaeker at 4:07 PM