A Master Bladesmith At Work 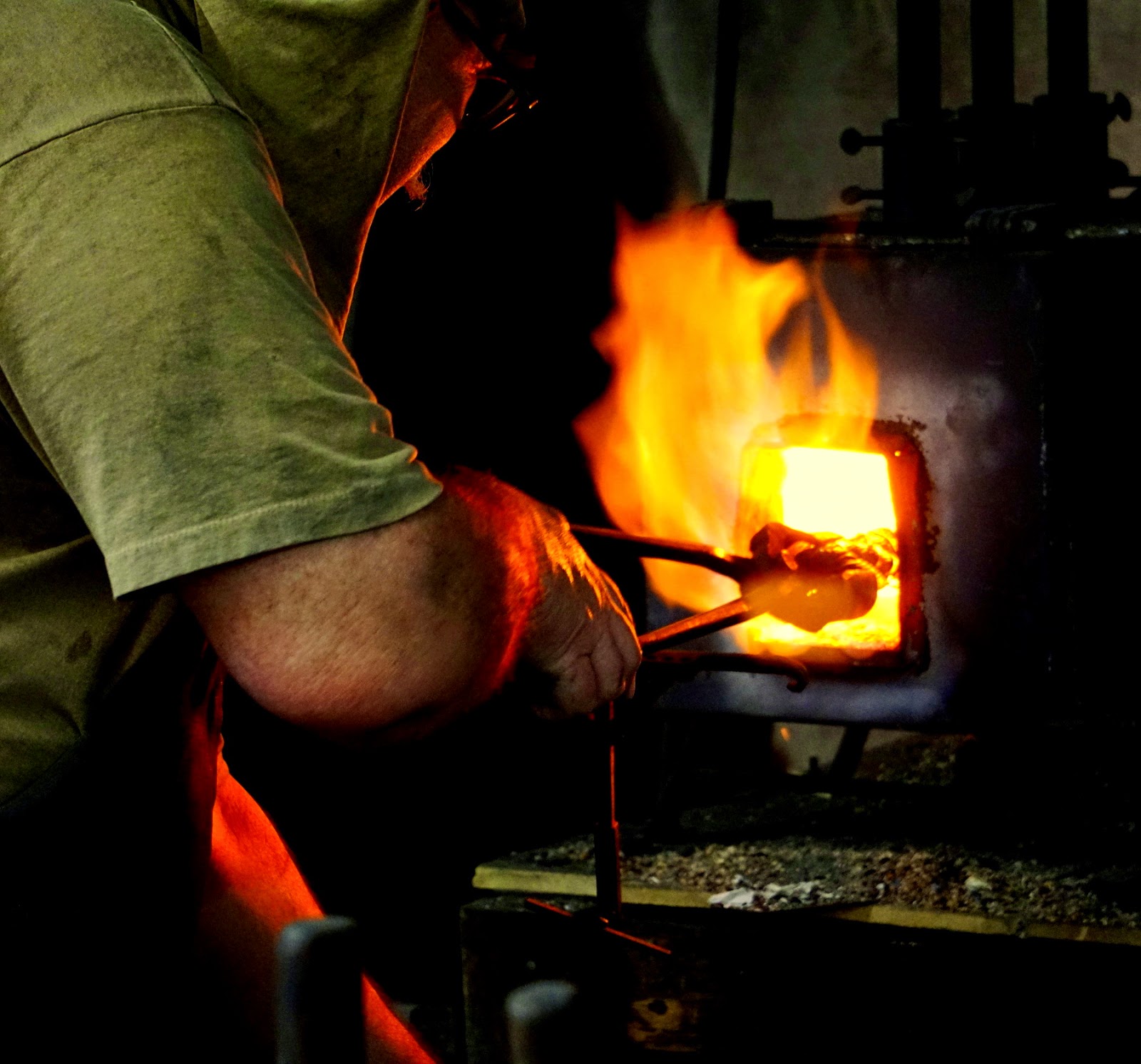 There is always something fascinating about watching craftsman and artisans at work.  The process of turning raw materials into works of art is downright fascinating.

This is doubly true when the process involves metal and fire.

So it may not be a surprise to learn that when I got the chance to spend a few hours in a working bladesmith shop during my last trip to Las Vegas, I jumped at the chance.

The bladesmith shop in question is called Salamander Armoury, which is run by Dr. Jim Hrisoulas, who is an old school master bladesmith, with over 45 years of experience.

I didn't realize it when I signed up for this experience, but Jim does not do a lot of demonstrations from his shop.  So, this was truly a unique experience, made possible due to friendships between Jim and one of the Scavengers I was hanging out with in Vegas. It was just myself, 7 other photographers, and a master bladesmith.  It was a privilege I did not want to waste, so I asked as many questions as I could, and kept my camera almost constantly shooting.

While we were at the shop, Jim worked on two projects as demonstrations for us.  The first involved taking a chunk of a large metal cable, and turning it into a solid metal bar.  This is a good way to turn a bunch of small bits of useless metal into something that can be used as a basis for a knife, or a sword.

He started by tossing the cable into his furnace, and letting the metal get red hot.  The furnace heats the metal up to 2200 degrees Fahrenheit, which makes for some toasty work environments. 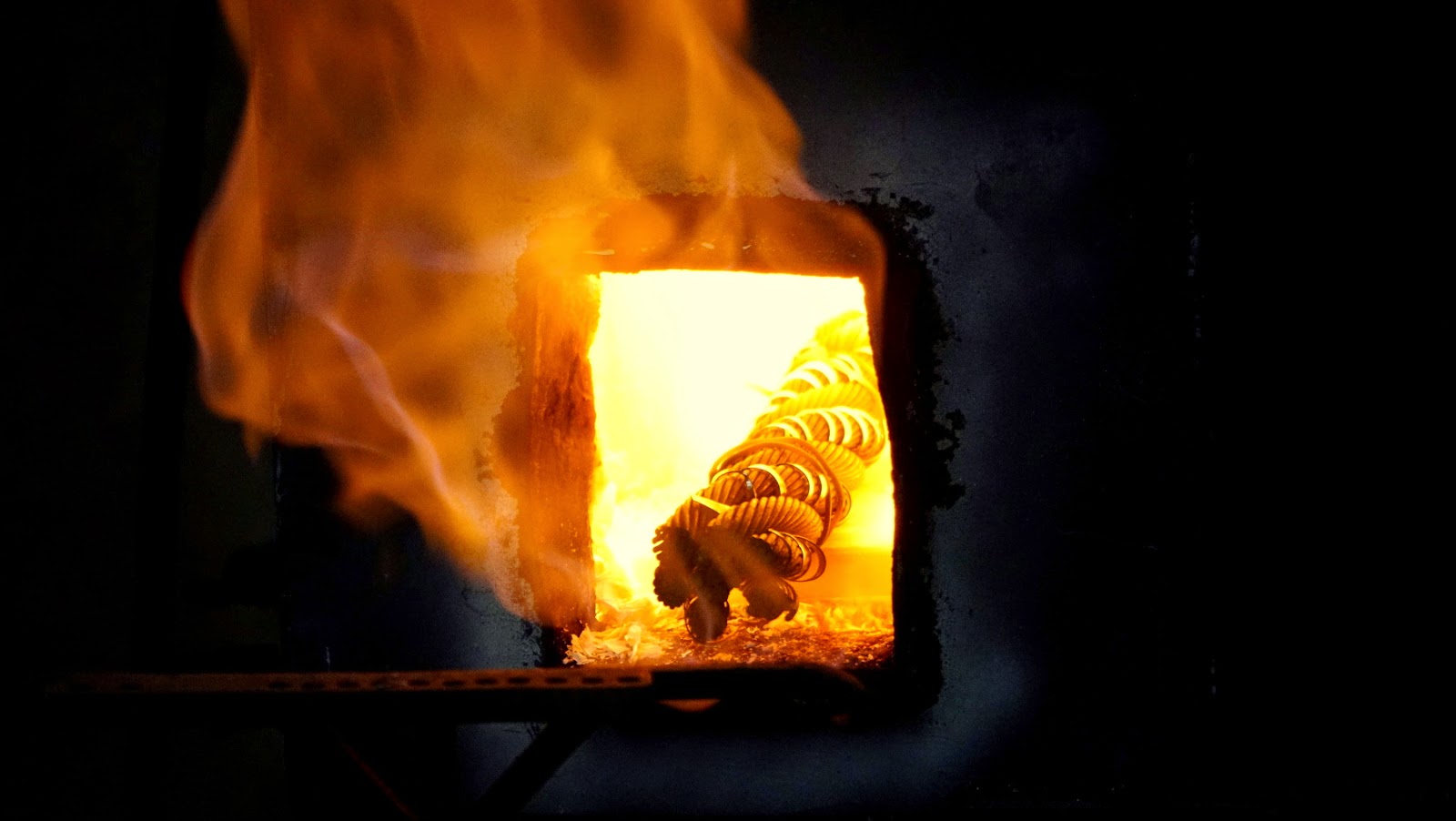 He would then pick up one of several hammers... 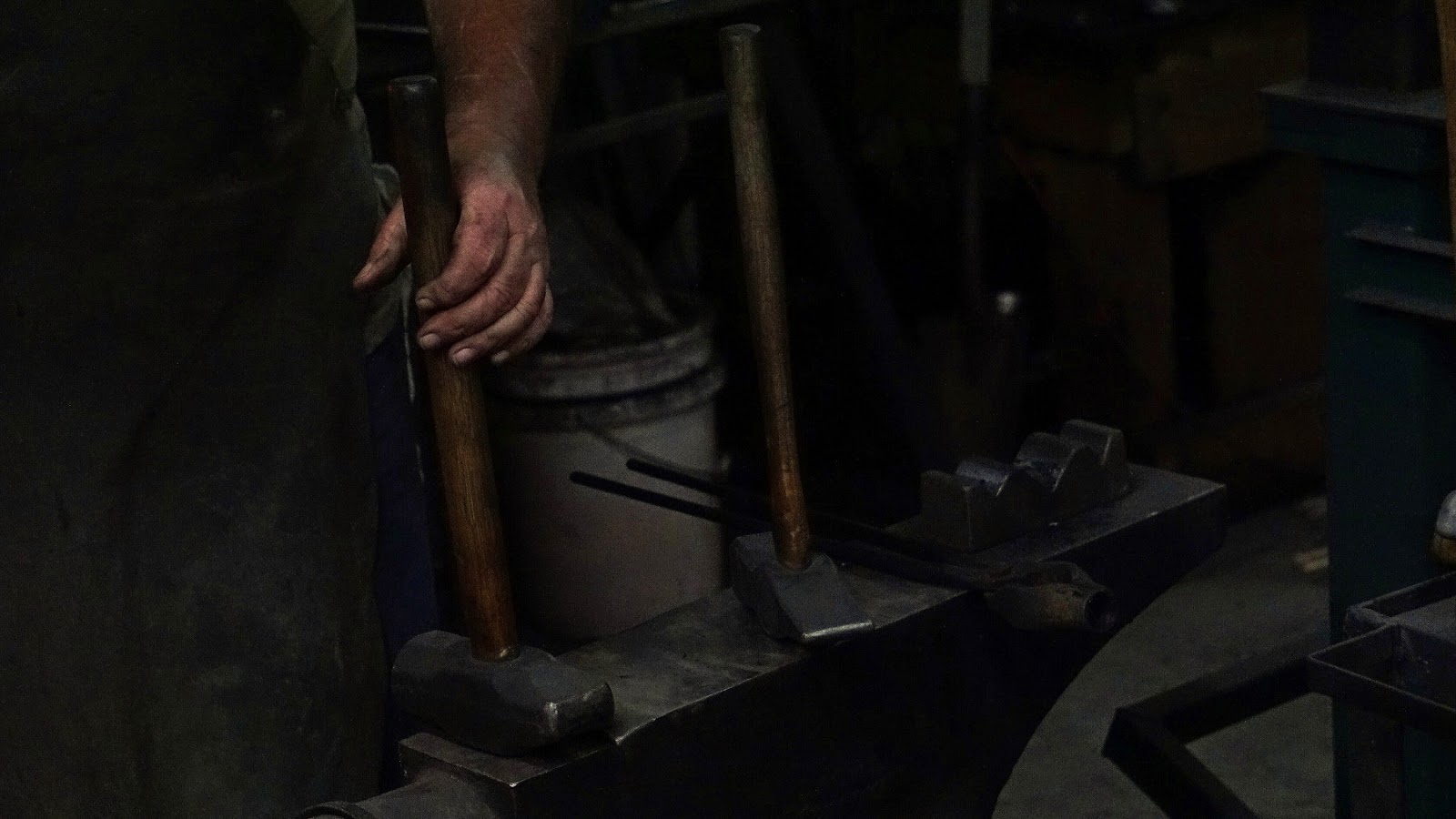 ... and pound on the molten cable until the metal cooled down into solid metal.  He hammered until the cable cooled to the point where it was no longer as workable. 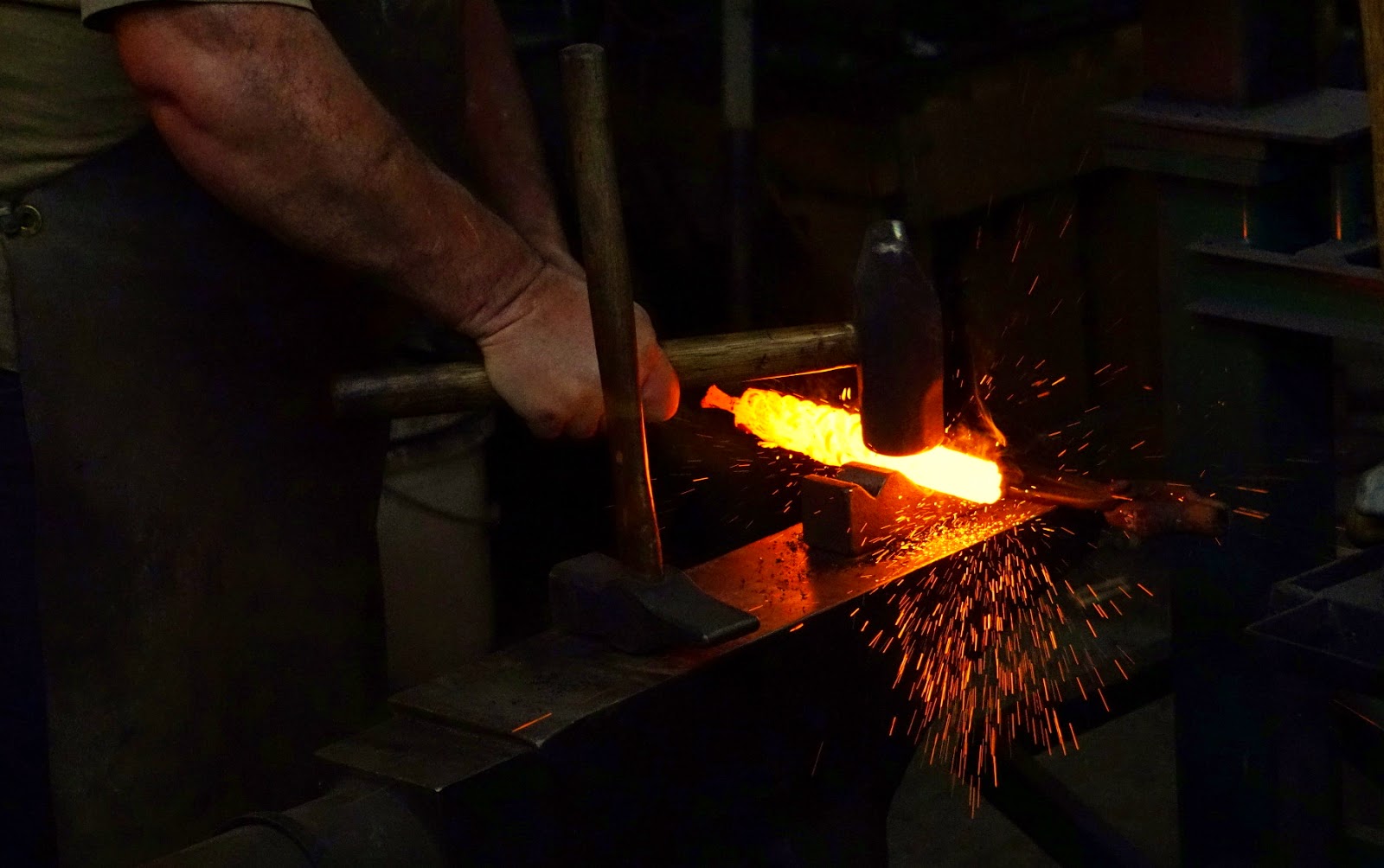 He would then put the piece back in the furnace and wait for it to heat up again.  He only seemed to get an inch or so of progress each cycle, and each pass thru the furnace seemed to take on order of 5-10 minutes, so it took him a couple hours to beat that cable into a solid metal bar.

One thing that I learned was this process of turning the cable into a solid bar is called welding. This confused me at first, as to my mind, welding typically involves oxy-acetylene tanks and torches, which none of Jim's process involved.

When two really hot bits of metal touch each other, they instantly bond, or weld.  The pounding of the hammer was to ensure all of the individual wire bits from the cable made sufficient contact with the surrounding bits to ensure it all welded together properly so it would become one solid bar of steel

Every few passes thru the furnace, Jim added a powder to the metal.  This is a combination of chemicals (none of which I remember, but it was an impressive collection of scientific names) that is used to help remove impurities from the outside of the bar.  From his description I ended up thinking of it as soap for metal (likely a grossly incorrect analogy). 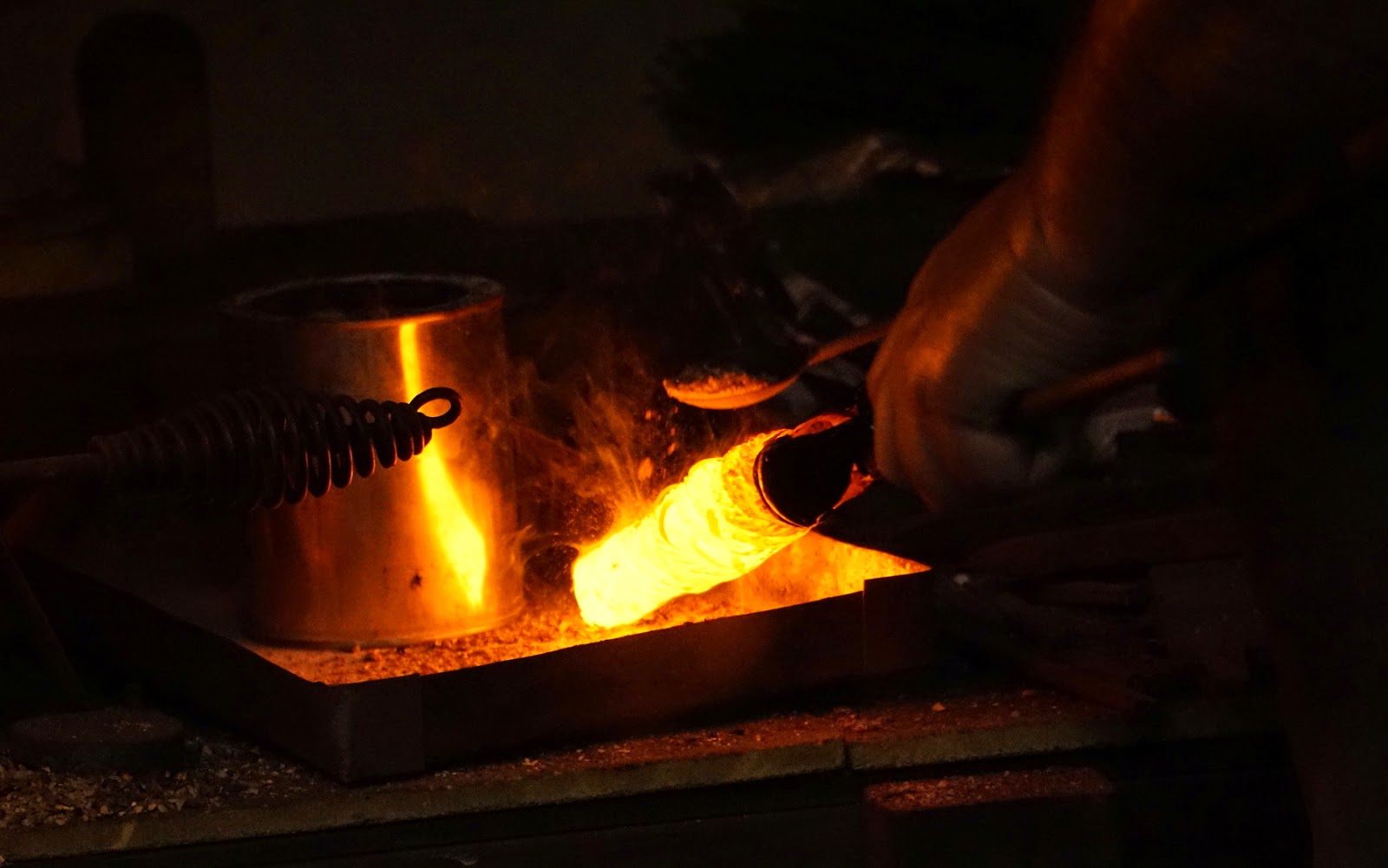 His second project was one of the most interesting things I have ever seen at artisan do.  He took an old railway spike - that looked like it came directly from a railroad line - , and over the course of a couple hours, turned it into a knife, right in front of my eyes.

Much of the process was the same as the iron bar - he started by taking the spike and tossing it into his furnace.  When it was hot enough to work with, he used his hammers to slowly pound the spike into the shape of a knife.

The one significant difference between the cable and the spike was that once the spike was formed into the shape of the knife, he used a grinder to sharpen the blade. 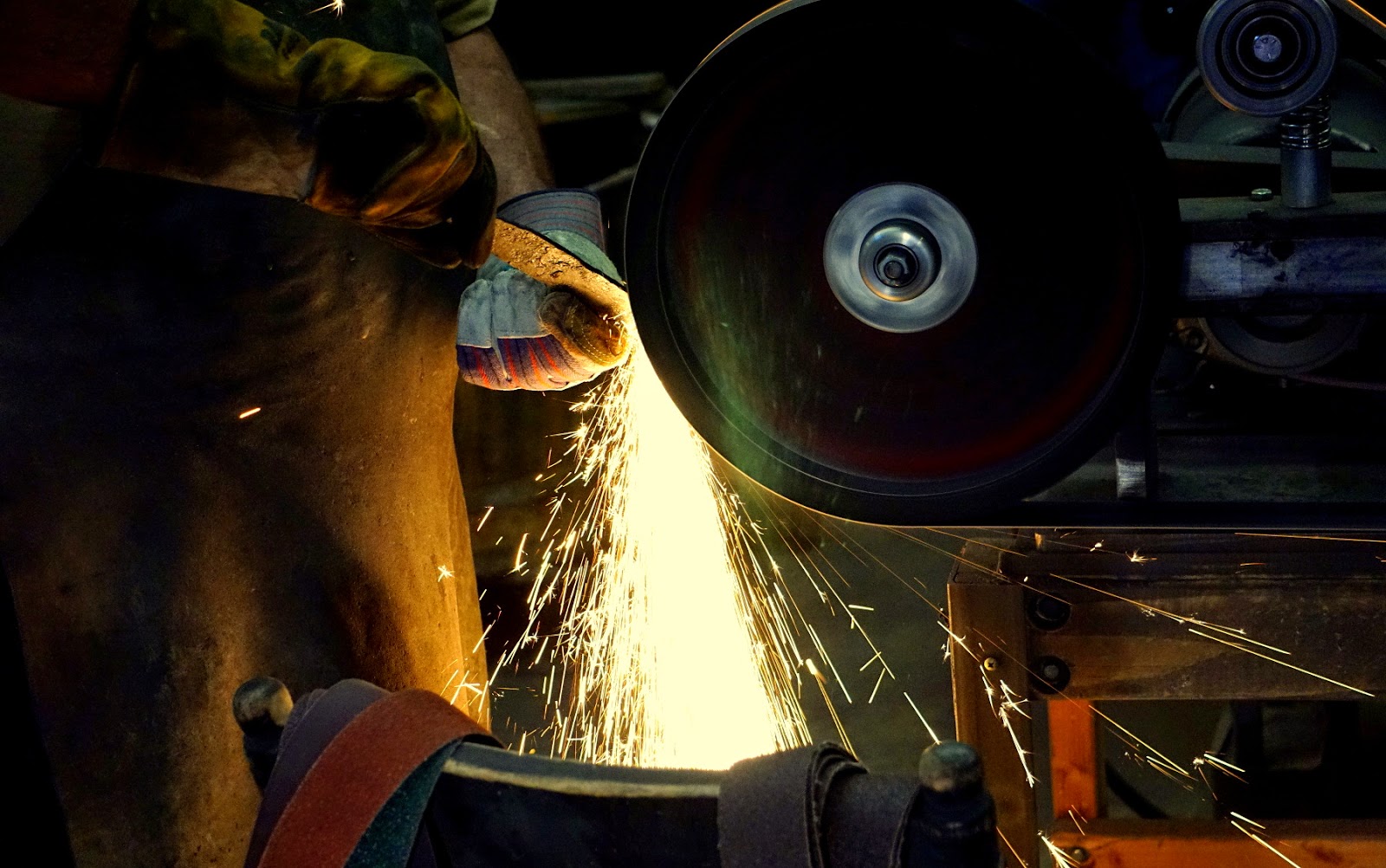 Apparently this is the exact same process that has been used for centuries.  Jim has some power tools (like the grinders, and some auto-hammers, which I didn't get pictures of),  however the only difference between then and now is that then just took a bit longer, however the general process was basically the same.

Occasionally (not nearly as often as I expected), he would dunk the hot metal into water, which is done to strengthen the steel. 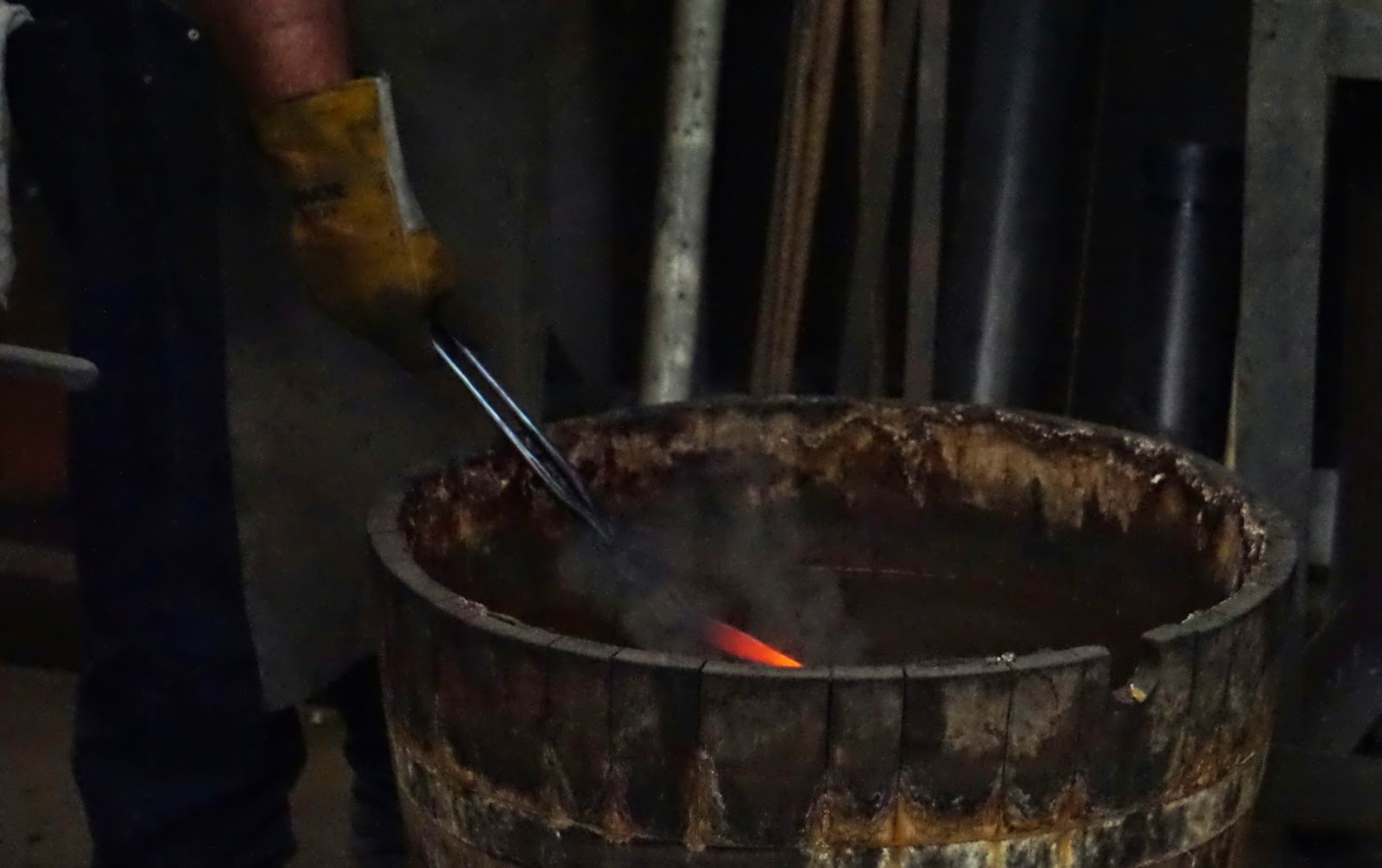 Jim is quite the animated character, and he had a lot of stories to tell us about his experiences as a bladesmith.  Here is is regaling us with one of his tales. 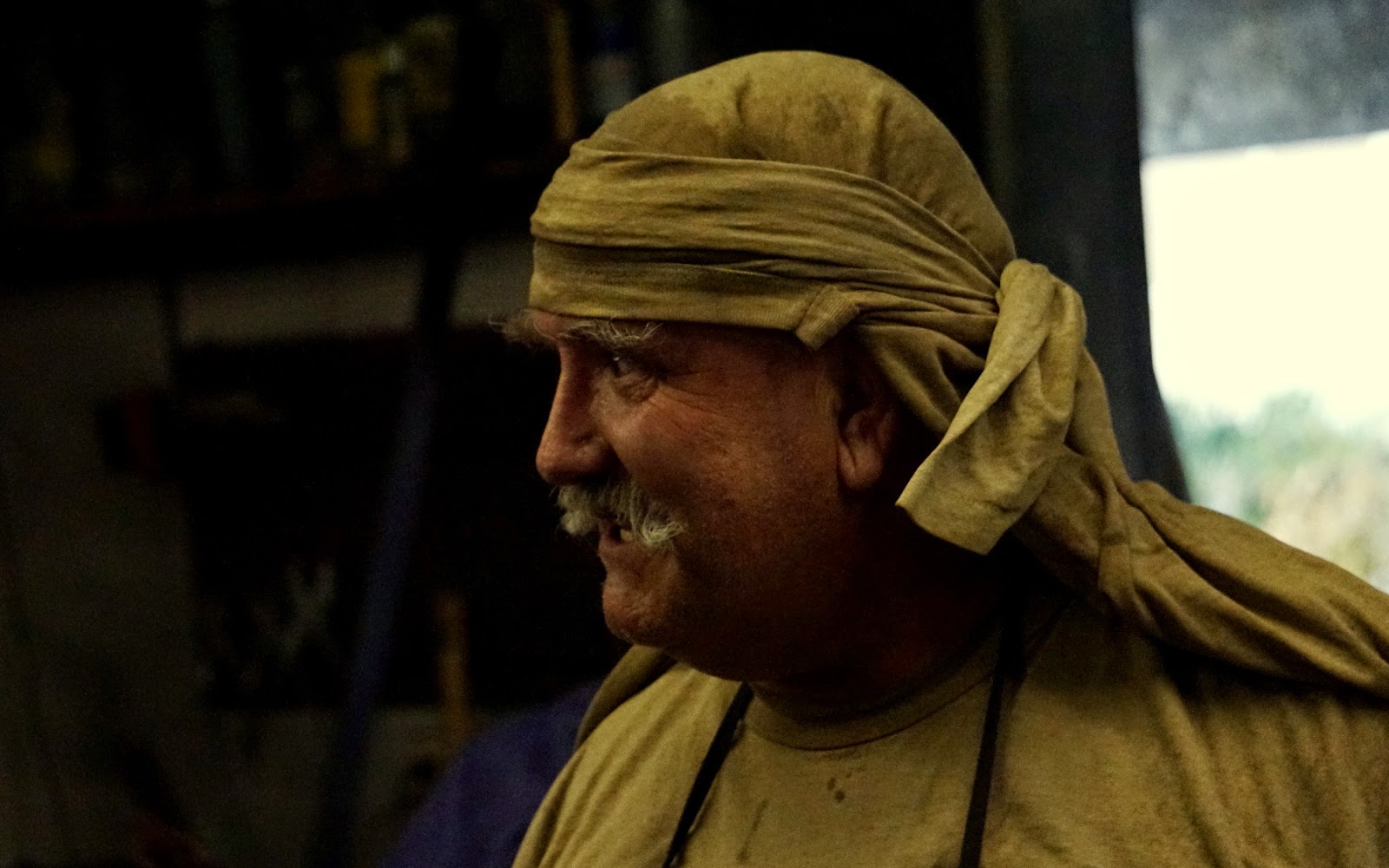 This is the final product, showing a spike and the knife he made, right in front of our eyes. (I tested it, the knife is indeed very sharp). 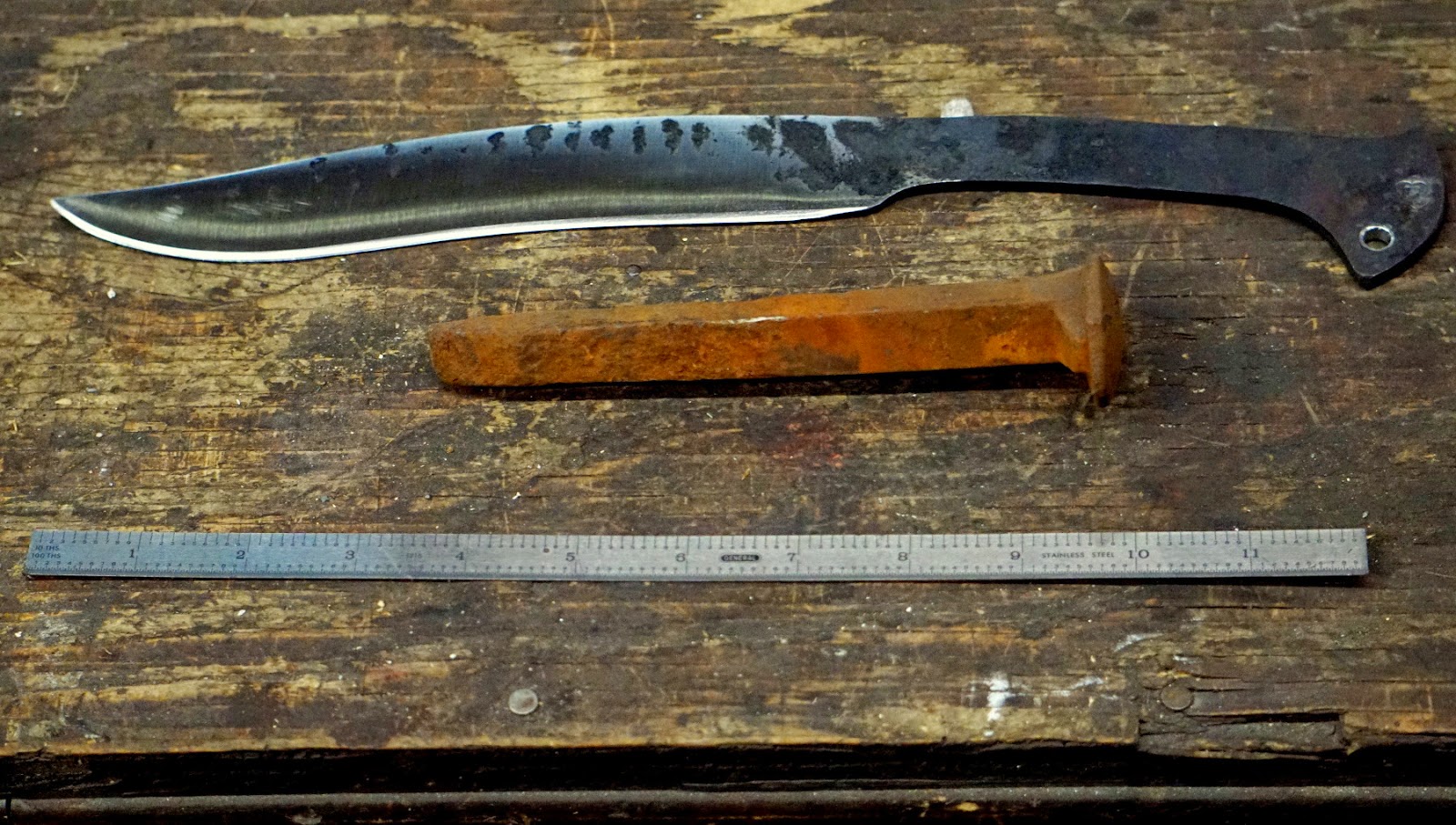 This was one of the most interesting experiences I've ever had.  I mean, getting behind the scenes exposure to witness an old-school bladesmith master make weapons out of nothing but metal, fire, and pressure... how cool is that?

You can check out some of the other pieces (some of which are absolutely amazing), at the website for Salamander Armoury.
Posted by Dave DeBaeremaeker at 4:52 PM