Sometimes challenges are a great way to step out of your comfort zone and try something new.  A case in point.

Over at the Toy Photographers blog yesterday, Lizzi issued the challenge to take a toy photo without a figure.  The idea being to create a story without any characters in it.  Intriguing idea.

I don't accept any old challenge that comes my way, and at first I was going to ignore this one too.  I love a good challenge that stretches me creatively, but I had taken several photos without figures in it.  I have a couple AT-AT photos that had no figures in it.  Then I remembered that those AT-AT photos were inspired by pictures of elephants, so really I thought of them as characters, so they didn't really count.  Nerts!  Perhaps I never have really taken a LEGO photograph without figures in it. So based on that insight:

There wasn't a lot of time to complete the challenge, so I got started right away.  At the time I was watching a Foo Fighters concert on YouTube, so my mind immediately went to a guitar. Perhaps a lonely guitar on a stage, waiting to be picked up and played.

So I hopped over to my studio and grabbed the most photogenic guitar I had in my collection.  An electric guitar needs an amp, so grabbed one of those as well.  I set up a couple lights to act as spotlights, and set up the scene.

As almost an afterthought I grabbed the smoke machine to add some atmosphere.  It was then that what I really wanted was not a guitar waiting to be played, but a guitar that was just put down after having been played.  Someone had just rocked his heart out on that guitar, and has just left the stage, leaving his guitar on the stage, still smoking from the rock show's special effects.

This is the resulting image: 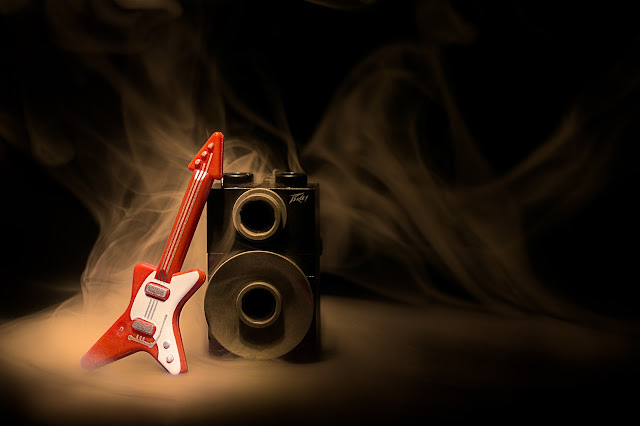 As it turns out, this ended up not reminding me so much of the Foo Fighters, but rather how I imagine Kurt Cobain's guitar looked after filming the Smells Like Teen Spirit video (yeah, I know, the guitar isn't the right shape, but beggars can't be choosers.  It is the colour of the smoke that sparks the mental connection in my brain).

So that is the story of how I created a LEGO photograph without any minifigs.

Posted by Dave DeBaeremaeker at 9:29 PM