Great Big Sea is a high energy maritime folk rock band from Newfoundland Canada.  Last night they played the McGlohon Theatre in downtown Charlotte NC.    Luckily all the details (getting last minute tickets, lining up a babysitter etc.) worked out and my wife and I were able to head down to Charlotte and check out the show. 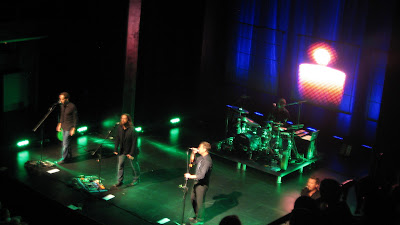 We have been fans of Great Big Sea for 10+ years, and it was a real treat for a couple of Canadian expats to spend an evening enjoying some amazing Canadian music.  We were not dissapointed.  GBS was in top form as they played a double set of their classic hits and some tracks off of their latest record.  The sound quality was almost perfect, and the audience interaction was fantastic.  The energy in the room started out high and didn't come down until the end of the last song.

If you are not familiar with GBS, their songs range from the serious to fun to extremely fun, and all celebrate the maritime culture that defines Newfoundland.  I managed to grab the following bootleg video of GBSs performance of a comedic song called Charlie Horse, which is a song about friends rescuing a horse who drowned in a lake.  It is a perfect example of how GBS songs often make light of the events surrounding the often hard life in traditional Newfoundland and Labrador.  Please forgive the video quality.  I only managed to grab one video before I was told "pictures were not allowed in the theatre".  I hope you enjoy it.

Posted by Dave DeBaeremaeker at 9:26 PM No comments:

We have been watching the latest season of Big Bang Theory on DVD. Zeke really likes the show, especially the theme song, and has started dancing to it.

It is surprisingly hard to capture a baby on camera doing baby things, especially a baby that knows what a camera is, and likes to mug to it. I managed to capture one of his performances on video, and present it to you, the Internet audience, for your amusement.

Posted by Dave DeBaeremaeker at 8:19 PM No comments:

On Friday my wife informed me that the local library was having their annual book sale.  Right after work we drove over and I picked up a few books... 45 of them.. all containing delicious prose about international intrigue, submarine warfare, space adventures, and how to knit sweaters (note: now is a good time to mention my wife picked up some books too).
In case you are wondering, most of the books I picked up are written by Dale Brown, Tom Clancy, W.E.B. Griffin, and that quirky captain that everyone loves to hate, Mr. William Shatner.
The total cost of these books: $41.80, including the wooden puzzle for Zeke. Not to bad... now if I only had time to read anymore... :)
Posted by Dave DeBaeremaeker at 5:17 PM 1 comment:

From Sept 14th to Sept 22nd I was in Ireland for a week of meetings and team building.  This was my second trip to Ireland, I will not bore you with all the details, however those who are interested in my comings and goings may find the following observations and notes interesting:

The following are some pictures.  They are a bit random as to location as I look pictures of the same areas from different perspectives while out and about in Dublin.  I hope you enjoy them.


If you are interested in pics from my first trip to Ireland, check out my picture gallery from 2008.
Posted by Dave DeBaeremaeker at 7:41 AM No comments:

The Canadian national anthem isn't the worst anthem in the world, but it could be better. For example he American anthem has bombs and war and stuff in it, whereas ours is about standing guard. Noble, but come on... bombs! Granted war is Americas strong point, and it is always good to play to your strengths. I still think we can do better. Since we gave the United States the inspiration for its anthem (War of 1812 baby - Google it), I figure we can come up with a newer, stronger, better anthem for ourselves. Here are two suggestions for a new anthem that play to our strengths. First our massive size:

Either of these choices would be awesome to hear during a gold medal presentation, wouldn't it?
Posted by Dave DeBaeremaeker at 2:43 PM No comments:

If only the real Obama was as awesome as this...

Posted by Dave DeBaeremaeker at 7:51 AM No comments:

In April 2009 I bought a bicycle so I could bike to work and get some exercise.  At roughly the same time I started keeping track of how many miles I walked and biked, and wondered how long it will take me to get to 1000 miles.  Today I know: I just logged my 1000th mile!
To put that distance in perspective, it is roughly equivalent of driving from Toronto, Ontario to Halifax, Nova Scotia, or  Philadelphia, Pennsylvania to Disney World in Orlando, Florida.  Not bad for a guy who 15 months ago barely left the couch.
So what does this mean exactly?  At work we have a website where we can track how much exercise we get individually, and how much we get as a company.  I used this site to track my miles.  I also followed these guidelines:
Despite having to overcome some difficulties, like a sprained ankle that sidelined me for 6 weeks, I had a lot of fun reaching this goal, and I plan on continuing walking and biking in the future.  I do need a new goal though.  I am thinking of using the distance across Canada from Halifax to Vancouver - 3600 miles - as a new target.  It has a nice ring to it, doesn't it?
Posted by Dave DeBaeremaeker at 9:13 PM 1 comment: