You may not know this, but the GPS satellites you use are owned by the US military. Originally GPS signals available to civilians were intentionally crippled to limit the accuracy of GPS devices to an accuracy level of 10 meters.

On May 2nd 2000 the civilian signals were changed to be 10 times more accurate, giving every person on the planet the ability (with the right hardware) to pinpoint their location anywhere on the earth with great accuracy.

On May 3 2000, Dave Ulmer hid a black bucket in a remote location near Portland Oregon.  In this bucket was some tradable items (including, among other things, a can of beans) and a log book.  He posted the GPS coordinates online so anyone could find his container.  This was the worlds first geocache.

The original container is long gone, and now a plaque has been placed in its location in tribute.  This Original Stash Tribute Plaque is a destination for cachers around the world, and is part of the triad (the others being Groundspeak HQ, and the APE cache).

Today I travelled to the area with another cacher, idajo2, to hunt the Original Stash.  Since one cannot claim a find without signing a log, there is an ammo can close by that contains the log.  A quick search later and I added the Original Stash to my find list.

There is actually a second cache, called the Un-Orignal Stash, within 10 metres of the Original Stash.  This is technically against caching guidelines (which limits the distance any single cache can be from another to 1/10th of a mile), however given by definition these caches helped create geocaching, its not inappropriate that these caches be grandfathered in ;).   The one issue with the Un-Original Stash is that it is up a hill almost 30ft of slippery mud (it only stops raining in Portland just long enough for the sky to reload), and the ascent is tricky.  I managed to climb up and back without too many issues and made the find.  idajo2 was a different story.

It should be noted that idajo2 is a grandma with bad knees.  She tried to climb up the slippery slope, and made it about a third of the way up before she decided she liked having working knees more than signing a log. At this time she turned around, and promptly fell on her butt, and slide down the hill a ways.  She was not hurt, but left the area incredibly muddy.  It simply is not a true caching adventure unless someone gets covered in dirt. This was a great caching adventure.
Posted by Dave DeBaeremaeker at 12:30 AM 3 comments: 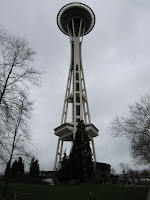 The last few days have been epic geocaching days for me.  On Thursday I flew to Portland Oregon for a work trip.    The Pacific Northwest is where geocaching started, and has an insanely large amount of caches, and an awesome caching community. Since I was in the area, I took Friday off and spent it  exploring some of the caching richness the area has to offer with my new caching buddy, caching name idajo2.

One of the highlights of the area is a series of three caches called The Triad.  The Triad includes Groundspeak HQ, the Original Stash Tribute Plaque, and  and "Mission 9: Tunnel of Light" AKA "the APE cache, as it was part of the promotion for the newest Planet Of The Apes movie. Our primary goal on Friday was to snag the HQ cache.

We started our day at 6am and drove 2.5 hours from nothern(ish) Portland to Seattle Washington.  We ate breakfast on the way to the cache, and we did some caching. I found my first nano cache.  When we finally hit Seattle, we first did some touristy things. idajo2 used to live in Seattle so she was able to show me some of the more awesome highlights of the city, a handy thing since we only had a few short hours to spend there.

Seattle is an interesting town.  Unlike most cities it doesn't seem to have a single style. Rather its a crazy mix of several architectural styles ranging from the amazingly mundane to the surprisingly artistic.  There are entire neighbourhoods filled with square mundane buildings that are mixed with architectural wonders, interesting sculptures, and artistic oddities, like the Space Needle and the Fremont Troll. One of the weirdest buildings is The Experience Music Project, a funky building built by Paul Allen (co-founder of Microsoft).  Naturally we did some more caching as we explored the city (for example: there is a micro cache under the bridge behind the trolls right elbow, just up the hill).

Since the Groundspeak HQ is at a working office, and the cache is in their lobby, one can only get access via appointment.  So at 2pm we headed over to the Groundspeak offices and found the cache.  While there we were able to meet some of the Groundspeak employees, who call themselves lackeys, and talk geocaching shop talk with them.   It was an interesting experience, and a good feeling to check one of the triad caches off my list, but the experience was short lived... we had one more major caching adventure in store for us this day.

After we finished with HQ, we drove 4 hours back to southern Portland through some of the finest rain and traffic the Seattle area has to offer to attend a large meet and greet caching event with the local caching organization GEOregon.  There were over 150 cachers there, which is 10x more cachers than I have ever seen in one place at one time.

After the event we went out and found a few night caches, before finally calling it quits.  I returned to the hotel at 11:30pm exhausted after experienced an epic caching day.

These Are The Daves I Know...

How many to YOU know?
Posted by Dave DeBaeremaeker at 11:59 AM No comments:

1000 more miles and I'll be due for an oil change and tire rotation.

*Self-powered == biked or walked.  See this post for more info.
Posted by Dave DeBaeremaeker at 10:01 AM 2 comments:

An urban street race caught on a camera attached to the riders helmet. This guy is definitely better than I am at biking...

VCA 2010 RACE RUN from changoman on Vimeo.
Posted by Dave DeBaeremaeker at 10:45 AM No comments:

Over the last couple of days we have received a lot of rain.  Today the creek than runs through town was overflowing its banks in several spots. 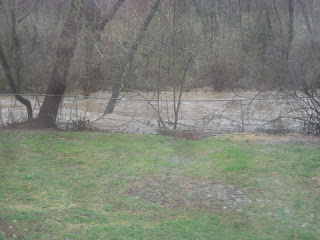 This is the view from my bedroom window of the creek that runs along the back of my property.  Normally the creek is so low the water is not visible.  The creek is up at least 6ft, and is 10ft wider than normal 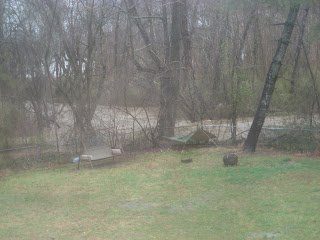 Another view of the far corner of my yard.  There is an old beaver damn 6ft under that torrent of water. 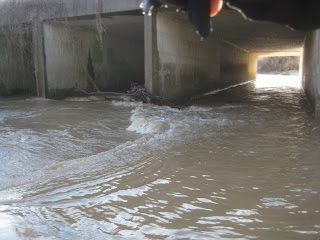 This is the view of the Lenoir Greenway (bike path system in town) that goes under Highway 321.   The opening on the right is the path, and its under at least 18" of water.

I decided to cut my apres-storm bike ride short after seeing this. 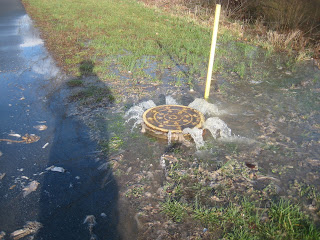 A backed up storm drain manhole.  Rather nasty stuff really.  This was washing over the greenway.

Needless to say the town is going to have to spend some time cleaning up from this storm.
Posted by Dave DeBaeremaeker at 9:33 PM No comments: